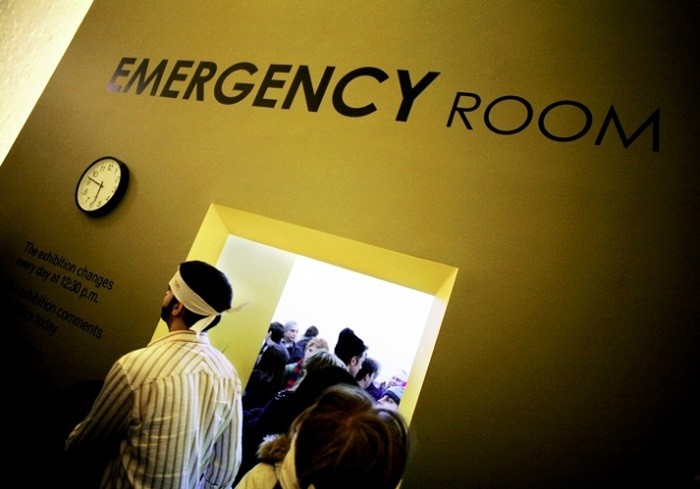 DALLAS, TX – In an amazing breakthrough for science, a new life form has spontaneously willed itself into existence in the break room of a local emergency room (ER).  Not only this, but despite its gelatinous form which seems to be a mix of leftover pizza, Chinese food, and cheese dip, it appears to have its own consciousness and a rudimentary mastery of the English language.

Scientists flocked to the local emergency room to study the new life form they are calling GOMIE, short for Gelatinous Ooze Malingering In ER.

Shortly after becoming self-aware, the living blob of cholesterol and fat managed to glob its way into the closest open room in the ER, leaving a slug like slime trail behind.  Then, defying all expectations, the blob managed to collect enough air within the folds of slime and managed to release the air through two pieces of rancid pepperoni.

“They normally give me 2 mg of Dilaudid,” came the first word from the amazing life form.

A nurse walked in the room which seemed to trigger some baseline cognitive function in the creature.  When she came near, the creature appeared to be in pain, yet as she walked out of the room the creature resumed globbing peacefully, apparently watching Maury.

Scientists have continued to study this unique life form, yet much is to be learned they reported.

“So far all we have discovered is that it is allergic to Toradol and Tylenol, yet amazingly it can ingest Vicodin without harmful effect.  Truly this creature is a wondrous inspiration to all of mankind,” scientists report.  “Only time will tell what this creature can do.”