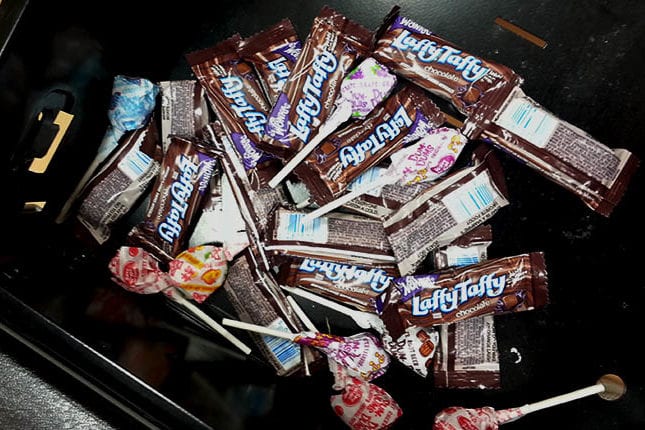 CARDIAC FLOOR – Reports around the hospital are the nurse’s candy drawer on the cardiac floor has run cold.

“You mean to tell me I started rounds on the 7th floor only to have the drawer picked over?” Dr. Helms was heard asking.  ““Seriously after banana, chocolate Laffy Taffy is the worst kind, and it has the worst jokes!”

This was verified by a third party, his “joke” read: What kind of candy gets the giggles? Laffy Taffy.

“Oh, give me a break!  They don’t even try on the crap flavors.  The green joke would have been epic,” he said as if his day was ruined.

Dum Dum Suckers are no consolation prize.  Leroy, a respiratory therapist, was overheard telling the nurses, “Dum Dums, dip some paper in sugar because that is what they are.  In 2 seconds I’ll be chewing on that paper stick gagging more than the COPD guy in room 7.”

“You might as well have a bowl full of lemon drops and lightly colored mints!” another physician complained.  “Did someone raid grandma’s candy dish?  Where are the peppermint-striped candies?” said the doctor with sarcasm dripping from his comments, who also hasn’t donated any candy to the drawer in over three years.

“I’d even take a Werther’s Original right now,” stated a medical student who has never contributed to the candy drawer.  He continues to mooch nonetheless from the nurses’ candy drawer just for simple daily caloric intake.

The hospital is a mess now, everyone but the 7th floor nurses that is…

Operation “Second Drawer,” also known as the plan to hide the “good candy” in the next drawer below has been a success.  The drawer is labeled as “The Joint Commission Updates” which includes Snickers, Hershey bars, and Reese’s Peanut Butter Cups.  Overall morale at the telemetry nurses station is high.  Rumor has it the Ghirardelli Chocolates lasted to the next shift.