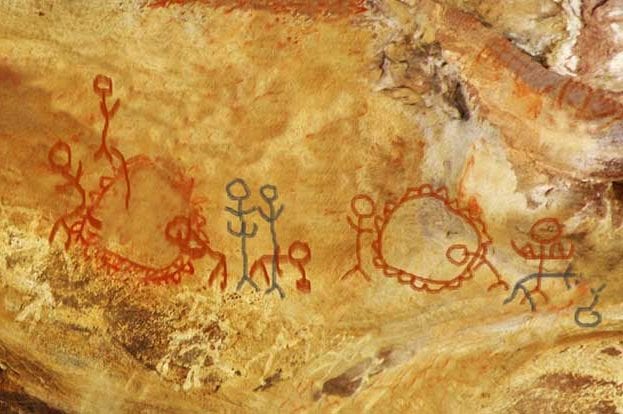 A landmark discovery in southern France occurred this Saturday: scientists uncovered a series of caves that may have been inhabited by humans over 15,000 years ago.

“The most remarkable thing about this cave are the writings on the wall,” Dr. Stevens lead archaeologist said.  “There appears to have been a big push in this area against having a separate source for drinking water.”

Dr. Stevens is referring to one of the “greatest health accomplishments of humans, after vaccines” when humans realized the benefits of not drinking the water that we bathed, defecated, and urinated in.  “Humans across the planet separated these two water sources about 20,000 years ago.  We then saw a large boom in the population, most likely because they were healthier.”  He went on to say, “One could argue this was the first preventative health initiative in the human race.”

“What makes this discovery so fascinating is this highly-affluent society was reverting back to drinking their own sewer water!  Even after clear cases showed this was unhealthy.”

Stevens went on to describe a painting on a cave wall that depicted people dying from drinking water from a source that another person was actively defecating in, as if it was a warning.  “The peculiar thing is that at a later time the dying people were attempted to be erased and happy people were drawn in their places with greater number, implying that this lifestyle was more natural and less toxic.”

This society was very advanced, arguably having the most advanced technology of any other human settlement at this time.  Inventions such as the wheel and special bronze tools don’t show up in archaeological digs for thousands of years.  Even the tribe’s accurate knowledge of the stars was not matched until the Mayans finally discovered it half a world away.

Archaeologists noticed how other cavemen’s walls were covered with this misinformation, as if it spread “virally.”  “It looks like this information was started by a beautiful woman with large breasts, who subsequently went on to form a Anti-Clean Water Tribe,” another archaeologist told reporters.

“There are clear stories depicted on the walls of prior societies that drank the same water source and died, these were painted over, perhaps to court this woman who the tribe listened to because of her large breasts and held celebrity status,” Stevens hypothesized.

The scientists of the tribe who brought all this advanced technology to them – especially the chronicling of these events – were turned against and beheaded for trying to stop this new way of living.  Scientists have always pondered why this particular group died out, and now they finally have an answer.

This society promoted a “unified water source,” because it was “more natural and organic.” They also casually linked drinking from a different water source with famine, drought, and incorrectly diarrhea, even though there was no true causation.  Dr. Stevens told reporters, “There was a lot of diarrhea at this site, and it affected everyone, even the people who drank from a different water source.  This was the major reason why this advanced society, that should have know better, died off.”