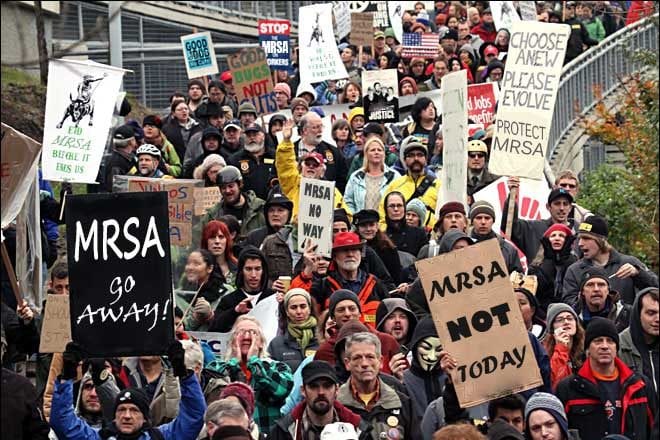 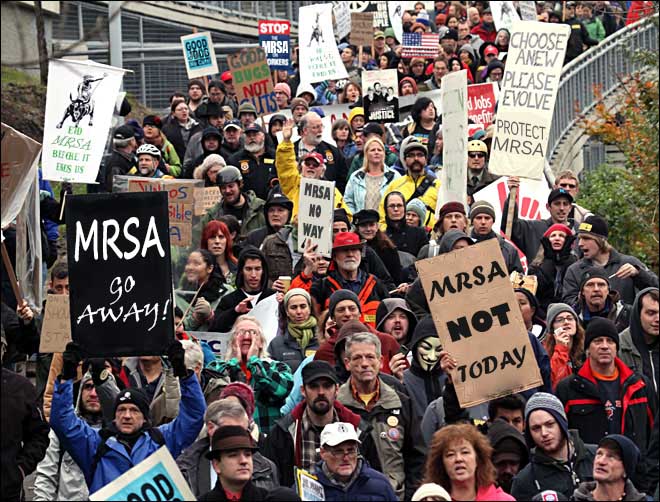 ALBANY, NY – New York legislators recently passed a new law that outlaws MRSA (Methicillin-resistant Staph aureus) in the state of New York.  This new law will make it illegal for one to have MRSA anywhere on their body.  “If you have MRSA, stay out of New York,” Governor Andrew Cuomo told reporters.

MRSA is a deadly pathogen that can be found on many individuals, but when it becomes infectious it can be very difficult to treat.  Doctors have struggled for years to kill this deadly bacteria, and they only have a few antibiotics left up their sleeves.

“We don’t want anyone to die from MRSA ever again, so we have to get rid of it; MRSA is not welcome in our state,” Cuomo continued.  “All of these shops selling MRSA will be shut down and driven out of New York.”

Police will start carrying nasal swabs and if they become suspicious of someone carrying MRSA, they will have the right to swab them.

Cuomo went on to say that he hopes the rest of the nation will follow suit and “ban MRSA for good” except for New Jersey, just in case NY’s prisons fill up.

“We know that once something is illegal citizens start to avoid it.  The only place where MRSA belongs, is in our prisons.”  Cuomo said to a cheering crowd of supporters.  Many who held rally signs that read “MRSA, Go Away” and “MRSA, Not Today.”

New York is starting to get some kickback from the anti-vaccination crowd, which again is using skewed science to promote their claim.  “MRSA is natural and exists now only because of the medical community’s abuse of antibiotics.  Do your research.  That is why we propose making all the toxins known as ‘antibiotics’ illegal.”  Some call for the right to harbor MRSA and should be allowed to apply for a permit to carry.

Even PETA is claiming that bacteria have rights too.  They say creating an environment that could potentially “make MRSA extinct” was not healthy for planet Earth.