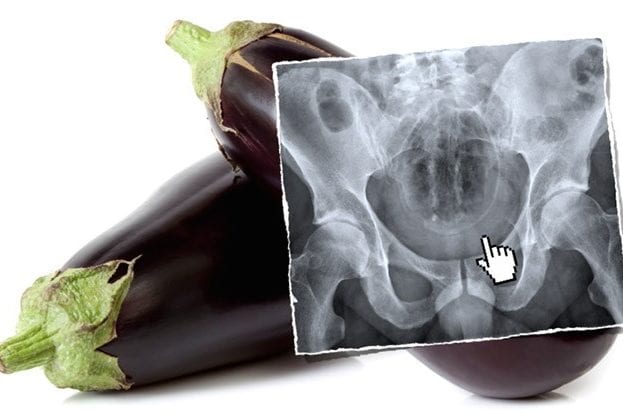 RICHMOND, VA – In what is thought to be a world’s first, witnesses have confirmed that a young Virginian man genuinely slipped and fell in his garden this week, entrapping an eggplant in his rectum, and stunning experts. 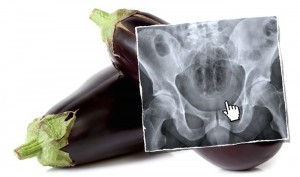 “We see people every month in our ER who report similar stories to try and explain their rectal predicament,” reports Dr. Murray Goldman who helped treat the man, “but we’ve never actually believed them.  In most cases a knowing look is exchanged between physician and patient and the discussion moves forward professionally.”

The distressing incident occurred at the man’s house on Wednesday while he was hosting a barbecue for work colleagues.  “Gareth emerged fully-clothed from the house carrying an eggplant and a small saucer of oil,” reports one witness.  “And then it all just happened.”

The hem of the man’s pants reportedly became caught on a small sapling, triggering him, his pants, the eggplant, and the oil to fall with such harmonious synchrony that rectal internalization of the vegetable occurred the instant his buttocks touched the ground.

“For a moment we weren’t quite sure what we’d seen,” another witness recalls.  “It was not until we saw the look on Gareth’s face, with his pants around his ankles, and noted that the eggplant was missing, that we grasped the enormity of the situation.”

Subsequent emergency room X-rays confirmed the awkward location of the eggplant and surgical removal was performed some hours later.

“Every doctor and nurse involved in this man’s case is absolutely stunned,” declared Dr. Goldman.  “If there weren’t fifteen traumatized witnesses, I’m sure no one would have ever believed this guy.  It is a solemn reminder that we should never prejudge our patients.”

“The man is expected to make a full recovery and is reportedly thankful the incident had not occurred ten minutes earlier whilst he was carrying a pineapple and a pound of butter.”

True case!  You can view it at Radiopaedia.org here!