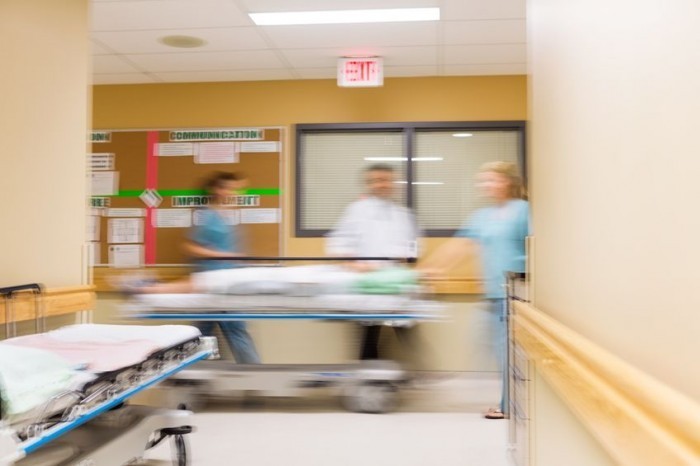 ZIP CITY, AL – After a record breaking week of admissions via the ER and an increase in scheduled outpatient procedures, St. Bertram Hospital in Zip City, Alabama has been bursting at the seams, with many ICU, telemetry, and med-surg admissions languishing in the emergency department for over 24 hours.

The ER nurses trying to juggle the needs of the admission holdovers with the ambulance and walk-in patients, have reached the limit of their endurance, as evidenced by the high-fives and fist pumps that occur every time the operator pages a Code Blue overhead.

“YESSSS!!  I might actually get a bed for my abdominal pain patient Mr. Harris!” chortled RN Molly Scott as she drew up and prepared his q2hour Dilaudid and Zofran dose and cleared the empty Big Mac box he had hidden in his bed simultaneously.

“Not so fast,” replied Lawrence Paul, another RN who was currently monitoring two unplaced telemetry patients while also working the ortho beds.  “I have a patient on a diltiazem drip that will need to go up first.”

An argument broke out between the two nurses during the debate over which patient was “sicker” after Nurse Scott insinuated that Nurse Paul was deliberately fudging vital signs and hadn’t actually had to titrate the diltiazem drip since 7:45 p.m. the night before.

“Both of you can suck it,” stated Frankie Jones, another RN who was spotted skipping and doing a happy dance down the hall when he heard the Code Blue, thinking that his patient in alcohol withdrawal was the clear front-runner for the hopefully-soon-to-be-vacated bed upstairs.

Unfortunately for all parties involved, a patient from the ICU ended up transferring into the bed to make room for an elective tummy tuck “VIP” patient.

Nurse Paul is still hopeful to transfer his patient upstairs tonight by just transporting his patient in the patient pneumatic tube system and pressing the “No Return” button.  Other options include the newly-installed eject buttons, but several ceiling malfunctions may limit this option.