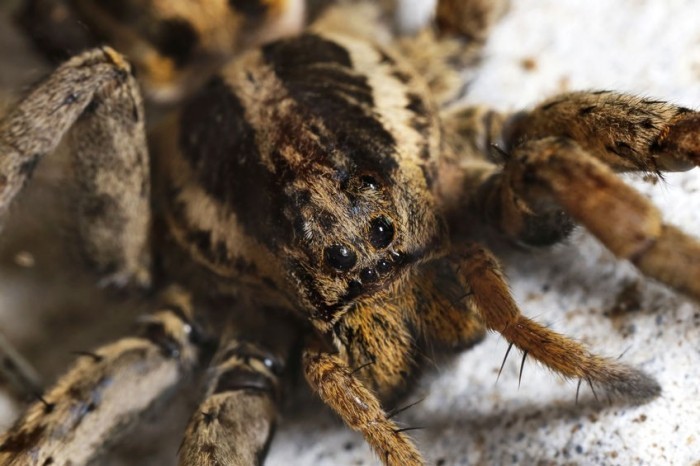 GASTONIA, NC – Following an all-too-familiar recent theme, a new patient was assaulted last week by a psychotic spider rampaging through the South.

Earl Wayne Thompson, 31, presented to Our Lady of Reflex Sympathetic Dystrophy Hospital last Monday with a red, tender, fluctuant area on the anterior forearm.  He reported that a large, furry arachnid quickly climbed onto his left arm the previous evening, and before he could react, the creature sunk its fangs into him.

He was able to knock the spider away, but unable to capture it.  Thompson, who was released from the county jail a month ago after serving a sentence on illegal drug possession, was merely “minding my own business” when the surprise attack occurred.

This is the 94th reported spider attack to the antecubital fossa in Gaston County this month.  The alleged assailant is believed to be “Cujo,” a wolf spider who was captured in Tennessee last spring, but escaped after chewing through the wire screen used to contain him.  Cujo was interviewed by local and state authorities in Tennessee prior to his escape.  Recordings of the interview were made public, and by slowing the digital playback, his high-pitched speech becomes intelligible.  The interview uncovers the chilling motives behind his reign of terror.

“I like the anterior elbow region since there are lots of delicious blood vessels there,” he sneered in a thick Romanian accent while gently twisting his tiny handlebar mustache between his furry pedipalps.  “I have learned how to creep up the hand and arm so softly that the victim doesn’t notice me until it is too late.  I prefer the blood of males aged 20-45 who have done jail time and have allergies to NSAIDs.  NSAIDs impart a strange flavor to the blood.  I have also found that, for some reason, the blood of victims with tiny, pinpoint pupils is much more rich and tasty.”

Federal and state authorities recommend caution if a spider resembling Cujo is spotted.  “It would be best not to approach him,” said Officer Larry Wilson with the NC State Police.  “Instead, call Animal Control and provide your location.”  Wilson went on to explain that Animal Control officials are now being equipped with ACE bandages to wrap their elbows prior to attempting an arrest of Cujo.