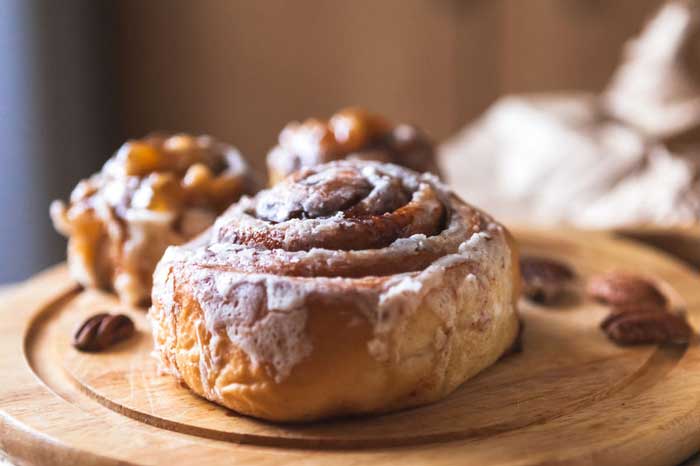 SEATTLE, WA –  In a bold move to increase patient satisfaction, the radiology department at Our Lady of Pseudohypoparathyroidism (OLPHPT) Hospital has introduced a delicious way for patients to be tested for delayed stomach emptying.  Gastroparesis, a condition causing bloating, vomiting, and in some cases abdominal pain, is on the rise thanks to the increasing life expectancy of diabetics, as well as the astronomical upswing in patients dependent on bowel-slowing narcotic drugs.

In order to be tested for gastroparesis, a patient typically eats a fried egg (with a Tc-99m sulfur colloid radioactive tracer incorporated into the egg’s protein) placed on toast.  After that, the patient is subjected to a series of images over time which shows how quickly the material exits the stomach. Gastroparesis patients retain the radiolabeled meal in their stomachs much longer than people without the condition. At OLPHPT , the radioactive egg is replaced with a Cinnabon® containing Gluten-595m, a radiolabeled wheat protein.  Betsy Stratford, MD, a radiologist at OLNIC, is credited with the idea.

“A colleague and I were eating a Cinnabon in the airport a couple of years back, and my friend remarked how the enormous, decadent, warm, soft, icing laden confection would later make her feel like she had eaten a nuclear bomb.  That was my “Eureka” moment.  Luckily, I have a degree in nuclear physics with a minor in culinary arts from University of Phoenix online, so making the radiolabeled gluten was a breeze.  Who wouldn’t rather have a mouth-watering Cinnabon than a tasteless egg on dry bread?  The patients have, quite literally, been eating it up.  Press-Ganey scores for our radiology department are in the stratosphere after making the change,” Stratford explained in an interview yesterday.

Stratford went on to explain how even without any imaging, a patient’s mere completion of the nuclear Cinnabon essentially rules out other serious upper gastrointestinal conditions such as bowel obstruction, gallbladder disease, esophageal stricture, and hiatal hernia.  She also confided that she has already seen over 100 self described “gluten intolerant” patients devour the Cinnabon with no ill-effects other than sleepiness.