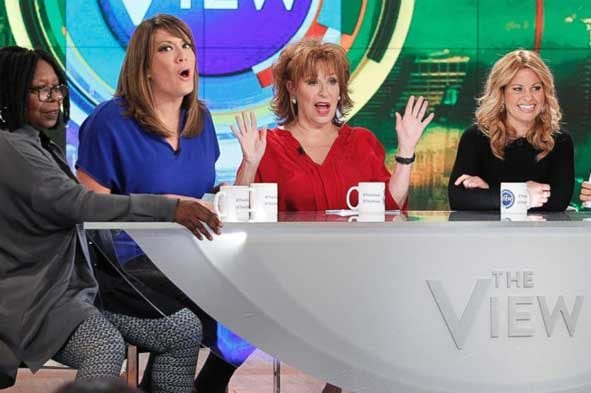 OMAHA, NE – Burpelson Hospital is investigating the apparent suicide of patient Grover Downs on the 13-East psychiatric unit.  Mr. Downs, an 84-year-old man admitted for catatonia and debilitation, overpowered sitters and orderlies to smash a chair through a shatterproof glass window and plunge to his death on the parking lot below, totaling hospital President Muffy Mirkin’s BMW in the process.

Preliminary investigation reveals that Mr. Downs’ in-room, wall-mounted television suffered a catastrophic defect and became stuck on The View.  In a second but likely related mishap, the mute function on the TV failed. Edward “Red” Buck, 13-East staffer, was one of the first people on the scene.

“It was surreal.  At first, Grover muttered something about Joy Behar under his breath, and all of a sudden he was up and out of bed.  He hadn’t been out of that bed for three weeks!  Me and Buff [Turgidson, a sitter] tried to hold him down, but he was too much for us, and we’ve got some muscles, too.”  Buck and Turgidson are semi-professional football linebackers working second jobs on the unit.

“He threw us off him and had that chair through the window on his first swing.  There was no hesitation when he jumped out.  The only thing I ever heard him say clearly, as he was falling, was ‘I hate The View,’ and then there was the sound of smashed glass and Ms. Mirkin’s car alarm.”

Burpelson Hospital’s preliminary investigation revealed that Mr. Downs was not considered a violent or aggressive patient.  Jacqueline Ripper, his nurse, stated that “nothing ever seemed to reach him” until his TV became stuck on The View.  Hospital engineering has yet to pinpoint the root cause of the TV malfunction.  At the time of the incident, The View was broadcasting a segment on Kim Kardashian’s new poodle fashion line.  In response to the situation, all hospital TVs have been shut off, leading to a 50% decline in admissions and a spike in against-medical-advice discharges.

Burpelson Hospital has also been thrown into chaos, as the police cordoned off the Administrator Parking Area, necessitating an “indeterminate duration parking strategic plan realignment,” per Drake Lionel, hospital spokesperson, as VPs have been forced to utilize smaller employee and physician parking spaces, leading to parking lot traffic jams and numerous meeting cancellations and postponements throughout the hospital.  Lionel further related that Ms. Mirkin is “just devastated.  She only had one payment left to go on her BMW.”

The Joint Commission has also opened a probe into Mr. Downs’ demise. Daphne Chambers-von Recklinghausen, RN, BSN, CPCS, speaking on behalf of the Joint Commission, stated that “we take all fall prevention with the utmost seriousness.  Whether falls could take place inside or outside of the hospital’s walls, regardless of extenuating circumstances, nursing units need to be on the highest alert.  Furthermore, there is no justification for the malfunctioning in-room flat screen TV.  That is a clear patient safety protocol deviation.”

Chambers-von Recklinghausen referred to a sentinel event in another hospital after a patient developed homicidal ideations and psychosis after her TV became locked on that hospital’s aquarium channel, and she introduced the Joint Commission’s pilot program to enforce evaluation and documentation of patient satisfaction with viewing choices. “Nurses and doctors should know what channels are available and how to quickly address TV malfunctions, as well as providing documentation of the above competencies.”

When Gomerblog attempted to reach Ms. Chambers-von Recklinghausen regarding details of the Joint Commission’s new television quality initiative, her assistant, Melissa B. Puffington, related that she was not available.  “She’s glued to The Talk right now,” admitted Puffington.