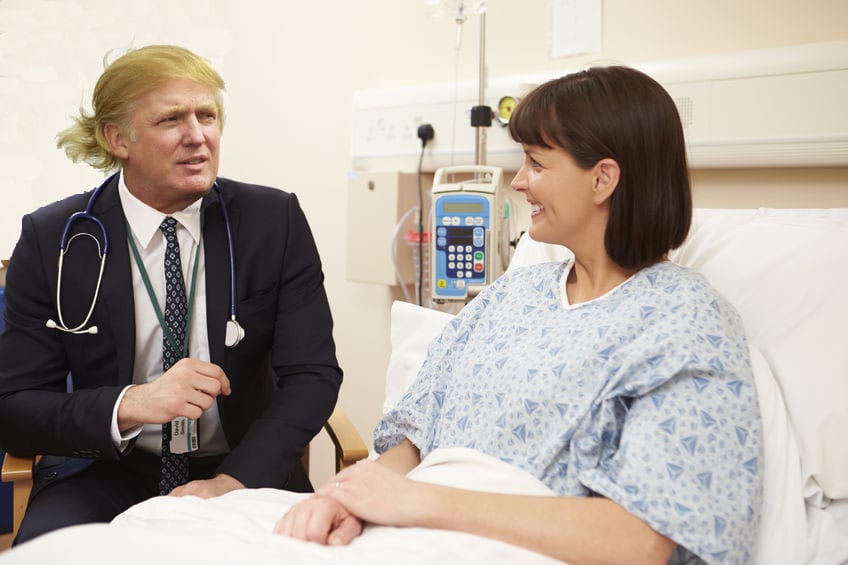 NEW YORK, NY – Dr. Trump makes his rounds through the halls of NYU’s hospital and you can overhear his barking: “Cisplatin you’re FIRED, it’s a non-Hodgkin’s lymphoma, start R-CHOP.” 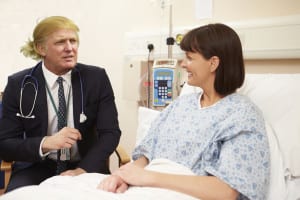 GomerBlog was lucky enough to follow along with this diagnosing icon. He latest patient Jennifer Cappo allowed us to listen in:

“Jennifer, I’m going to tell it to you straight, it’s a tumor.  In fact it’s the biggest I’ve ever seen.  It’s yuuge,” Dr. Trump told his new patient.  He continued make many hand gestures with is unusually small hands, while describing his medical plan.  “I’m going to get the best chemo therapy agents that you’ve ever seen.  It’s going to be fantastic.  Believe me.  I’m going to make your body great again.”

He continued, “The medicine will make a wall around the tumor and then it will make the tumor pay for it.  Oh it will pay for it, trust me.  It will be tremendous.  You’ve never seen anything like it.”

Dr. Trump started to deviate a little went he ranted about his degrees, “I went to the best medical school, I trained my teachers it was so good.  They never saw anyone like me.  Then residency was just incredible.  Only the best.”

He then continued telling Jennifer about her treatment: “I’ll get all the best doctors, some really good friends of mine, they really like me.  I mean, they think I’m great to help you out.  We are going to be winning against cancer before you know it. Let me tell you my thoughts on cancer: these cancers, they’re not sending us their best cells. They’re bringing tumors, they’re bringing hormones, they’re bleeding internally. And some, I assume, are benign.”

Jennifer interrupted briefly.  “What drugs will I be on?”

“First paclitaxel, I just love paclitaxel.  Love it.  Then doxorubicin.  Do I love doxorubicin?  Not so much.  It might cause heart failure.  But then we’ll give you Coreg and will get it the heart pumping right again!  Will be winning winning winning.”