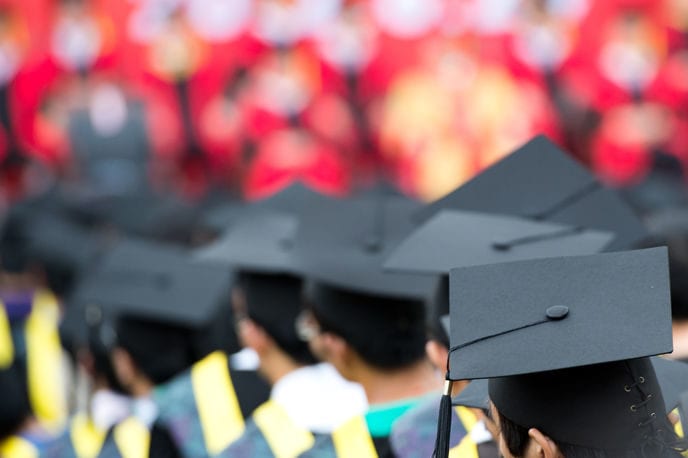 PARKER, CO – At Rocky Vista University College of Osteopathic Medicine newly minted doctors received a bit of a surprised at commencement. You could say their expectations were doubled. C. Allen Parker, Wells Fargo CEO, gave the commencement address and dropped a financial bomb.

“Class of 2019, you all have a large debt,” He proclaimed loudly and forcefully. “I want you all to pull up your debt on your phones with me.” He gave them a couple minutes to log into their accounts on their phones, the crowd started to become excited for what they hoped came next. Instead a dump-truck of salt was dumped into their financial wounds. “It just became larger, it doubled as of today.” He then rotated the microphone horizontally and dropped it on the floor.

The student body erupted has they all saw the numbers on their phones skyrocket. Some threw their hats and phones trying to hit Mr. Parker. Some students shook their heads in disbelief. One student removed his gown, started to scream, and ran out of the building naked. Others started to cry, but a majority shrugged. “Well if medical school would have cost double I would have taken out double the amount of loans, I want to be a doctor and I’ll do whatever it takes,” Christina Phillips told reporters.

“The choice seemed reasonable at the time,” dean of student Janet Rothesburger said of asking Mr. Parker to speak at the school. “All of our students carry at least $350,000 of debt upon graduation. Who better than a banker to tell them how to get out of it.” Turns out the monopoly man skipped the life advice and just doubled their debt instead.

After hearing about Robert F Smith paying off all of the class of 2019’s student debt at Moorehouse College, every graduate across the country has dreamed that their institution would be next.

“I thought for sure super rich bank CEO would help us out,” newly minted doctor Pete Jenkins explained. “I guess you don’t become a billionaire  writing checks”

“He shocked us alright,” Debra Williams said. “He turned the defibrillator up to 400J and didn’t even say clear. Evidently there was a clause in our contracts we signed that they can do this. What were we going to do, read the contract?”

At press time all the primary care and pediatric matched students were on the phone trying to scramble into Radiology, Pathology, and Geriatric spots.