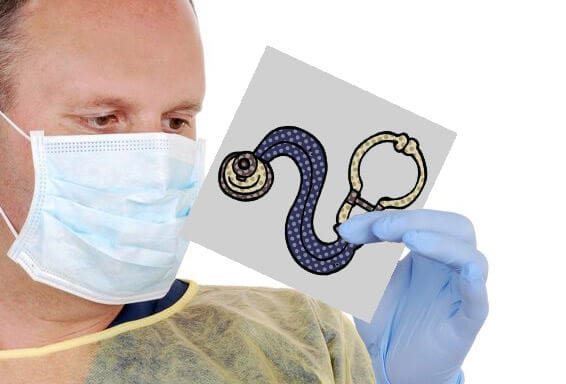 CHARLESTON, SC – In an effort to cut down on cost and auscultation, hospitals are deciding to change to a illustrated picture of a stethoscope.

“This is much better,” Harris Sumfeld told reporters. Mr. Sumfeld, the hospital’s infection control officer, recently transferred last week from Staples Headquaters. Like most hospital administration, it only takes a week to understand the ins-and-outs of medicine. “I’ve been here a week and noticed that the current stethoscopes are major source for infection. A patent tube connecting a non covered ear and a MRSA patient is just crazy.”

Nurses surprisingly aren’t complaining about this change, “Nobody can hear anything with those old disposable stethoscopes anyways! Now I’ll just print out a copy of the stethoscope, point it at the patient, and document 16 respirations.”

Some have reported even hearing a systolic murmur and lung congestion, which is more than has ever been auscultated with a typical contact precaution stethoscope. At press time it was later revealed that the nurse was the one with murmur from her prosthetic valve.