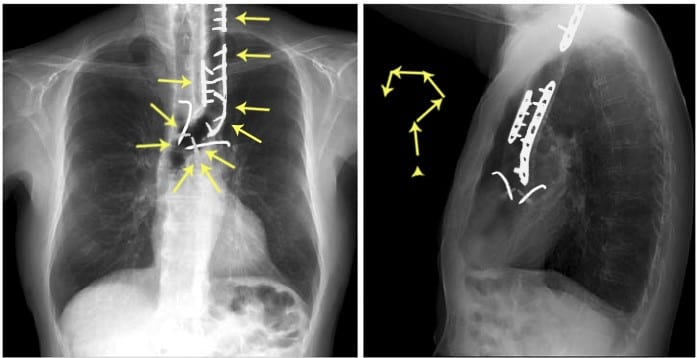 Toronto, ON – In a world first, Dr. Chipper has carried out what we’re cautiously calling a successful open reduction and internal fixation (ORIF) of the aorta.

The patient, 58-year-old Joe Paulson was booked for an elective hip replacement on December 21, 2019. As Dr. Chipper was reviewing Joe’s films, he spotted a strikingly displaced and angulated bone; later identified as a severely calcified aorta, on Joe’s pre-op chest films. Concluding that anatomical function would be severely limited in this awkward position, Dr. Chipper snuck in a quick aortic ORIF while the anesthesiologist was fiddling with IV tubing. Three plates and thirteen screws were used to secure the freshly osteotomied aortic arch. Two K-wires brought the distally communited bone fragments, now known to be aortic valve leaflets, into ?anatomic¿ position. 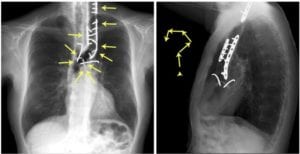 We are happy to report that Joe is doing well other than a moderate headache and a whooshing sound in his ears. In a tip picked up from rheumatology, Dr. Chipper is managing Joe’s somewhat cool lower extremities with a topical nitroglycerin ointment.

We are unable to explain how Joe is possibly alive. Mere days after learning about the outcome of this case, the anesthesiologist involved was admitted to a psychiatric ward after colleagues found him rambling about ‘physiologic sense’ and drawing elaborate flow diagrams in the hospital basement. This anesthesiologist is not alone in his struggles.

The radiologist who read the post-op films tells us she was so confused that she actually left the department to clinically correlate herself. The cardiology department has collectively refused to follow Joe citing a lack of studies looking at the effect of antiplatelet medications on screws.

On the other hand, the hospital’s prestigious vascular surgery program has repeatedly attempted to recruit Dr. Chipper in hopes of studying his elusive surgical techniques. Several emergency physicians have already attempted to refer aortic aneurysms and dissections to Dr. Chipper’s fracture clinic. When asked to comment on the case, Dr. Chipper had this to say: “bone straight”.