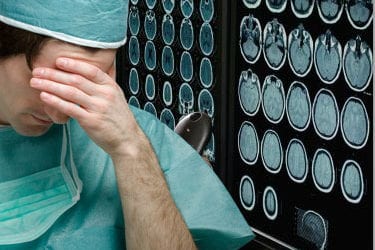 Starting in March 2020, an alarming trend has been noted across all police precincts in the United States. Healthcare workers have been committing violent acts against dumb family members at a shockingly high rate. Two recent cases located in northern Florida typify the scenarios that are being seen across the nation.

Police reports describe a chilling scene on the evening of May 22, 2020. Dr. Mary Hautman, an intensivist at Tallahassee Central Hospital, returned home after a 36-hour shift. She disrobed in her backyard, stuffed her scrubs in an empty garden planter, showered with a cold garden hose, and then went inside her home to shower again and find a pair of sweats. When she returned, she found her mother-in-law, Mrs. Peggy Hautman, pulling her scrubs out of the garden planter. The police report reveals the following altercation. “These don’t belong here!” Mrs. Hautman admonished Dr. Hautman. “Honestly, it’s easy enough to just run a load of laundry. You don’t have to leave dirty clothes outside for everyone to see! I’ll just take them upstairs to wash.” Dr. Hautman reportedly screamed “NOOOOOOO!! DON’T TOUCH THOSE!!!!” before tackling her mother-in-law. Both women rolled down a hill at the back of the property, and the local police were contacted by concerned neighbors.

A second disturbing police report comes from Jacksonville, FL on May 10, 2020. ER nurse James Wilson left a 14-hour shift at St. Luke’s Medical Center. While driving past his elderly parents’ home, he noted bright lights and music coming from the property. He changed out of his scrubs in his car, placed the scrubs in a plastic bag, liberally wiped his entire car and any exposed skin with Purell, put on a fresh set of clothes, and then went to investigate.

He rang the doorbell and then carefully stepped about 12 feet back into the yard. The police report shows that Wilson’s brother-in-law Tim Sheffield answered the door. “Hey, Hero. Your sister and I brought some friends over for your mom’s famous meatloaf! We were just talking about all the hype on the news. I can’t believe everyone is blowing this out of proportion! Seriously, like 98% of people who catch this are totally fine.” Wilson allegedly yanked Sheffield onto the front lawn and then tried to asphyxiate him with the plastic bag containing his dirty scrubs. The police were called and arrested Wilson, who was heard yelling “I hate you, Tim!!!” as the patrol car drove away.

These reports are just two examples of the recent rise in healthcare workers on dumb family member violence. The trend is increasing nationwide, with a jump of 86% in comparison with similar months in 2019. Police chiefs nationwide have released statements urging that “All dumb people follow CDC guidelines and just leave your relatives who work in healthcare the eff alone.”