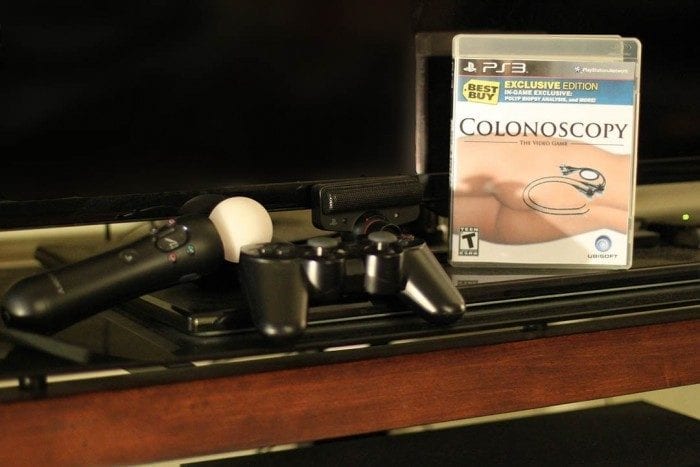 The game begins in the pre-operative holding area where you can choose your character and patient.  Phillip Frommer, the head game developer, is very excited about the game and the different patient selections.

“You can choose between multiple patient configurations such as a demented 70-year-old patient on blood thinners or, if you really want a challenge, you can go for the 340-lb patient who has multiple drug allergies,” said Frommer.

“My favorite patient is the combative schizophrenic who has an incomplete and poor bowel preparation.”

Selecting your patient is only the start of the fun.  You can elect to have a competent or incompetent sedation nurse or anesthesia provider, to add an “extra level of difficulty” to the game.

“Having a moving and groaning patient can really make or break your scoping adventures.  You can score higher points for finding the ileocecal valve in a moving patient,” said Frommer.

After your patient and sedation provider are selected, the real gaming can begin.  You can direct your scope through multiple cavities and twists of bowel, just like a real colonoscopy. “We make the game highly realistic with having the scope get stuck for upwards of an hour in one location,” said Frommer.  “You have to know how to tell your assistant to push on the abdomen to help get the scope through.”

“Find polyps, get to the ileocecal valve, take biopsies and pictures, and don’t forget to retroflex the scope on itself at the end before pulling out for bonus stars.”

Local video game tester, Leonard Dinsworth, said, “Holy Toledo!  This game was action packed from the start, but not with stool.  Maneuvering in between colon folds and pockets of fluid was gross, but so fulfilling and awesome!”

Another tester said, “The flatulence sounds really made me feel like I was actually in the room too.  I recommend playing with Dolby surround sound set to a volume of 11 out of 10.”

Several other game settings really add a sense of realism with the “bowel perforation” scenario and the “malpractice lawsuit filed for awareness under anesthesia” settings.  Don’t forget the “apnea” and “aspiration” settings too, they are loads of fun too.

The success of Colonoscopy 2016 has led developers to think of other virtual video games such as Knee Scope Attack and, our favorite, Colposcopy Adventure.