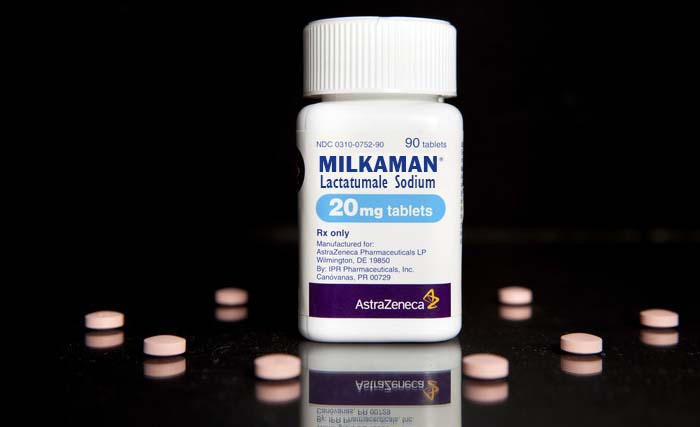 Originally a failed drug for women, it was serendipitously discovered to work in men when a male lab tech mistook them for Mentos.  “The project was almost scraped until a male summer intern took some old pills and began oozing all over his shirts,” Dr. Carlson told reporters.

“An absolute game changer,” said Dr. Henry Doobler, a well-renowned obstetrician.  “Men can now experience the joys of breastfeeding.  Plus we have clinical data showing babies breastfed by their fathers turn out smarter than those breastfed from their mothers.”

Tyler Wilson, a new father, is exhilarated.  “My nipples have been pretty useless until last week.  Now they are gushing out breast milk!” said Wilson.  “It also comes in handy at work when I forget to bring milk for my cereal.  One side effect occurs when the break room runs out of coffee creamer and lots of co-workers start knocking on my door.”

New dads are flocking to their doctor’s offices to get the new pills.  “I mean at first people looked at us strangely when we breastfed in public,” said Wilson.  “Now we have data showing our pectoralis milk is far superior.  I mean infants are able to build block towers 2 blocks higher and have 1.3 more words if they drink dad’s breast milk.”

For years the controversy had always been between breastfeeding and formula feeding one’s baby.  Now there is a third option on the table for families.  Immediately new clubs formed, including the La Leche de Padre League (LLPL).  Founder of the league, Marco Robertson, stated, “Our goal is to promote this far superior form of feeding to the public.”

When asked if he is concerned about hurting the feelings of mothers who choose to breastfeed their babies or fathers where Milkaman isn’t working, Robertson responded, “Not at all.  When a superior form of feeding is developed, all people should do it.  If you don’t do it, you are making a poor decision for your baby and you should feel guilty.”

Of course this new trend is not without controversy.  Many establishments are asking these fathers to leave while breastfeeding, especially those who refuse to cover up.  Dan Wheelan was at the Madison Mall, when a security guard came up to him and asked him to go to the bathroom.

“People are getting uncomfortable is what the guard told me.  I was outside an Abercrombie & Fitch store, and people thought I was too revealing?”

LLPL and other lactivists are planning “nurse-ins” at their local A&F on Thursday.  On Saturday the nurse-ins will be the biggest, occurring at many Home Depots across the country in the lumber department.