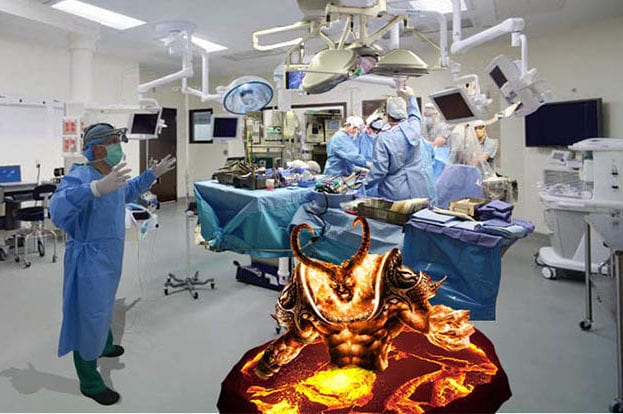 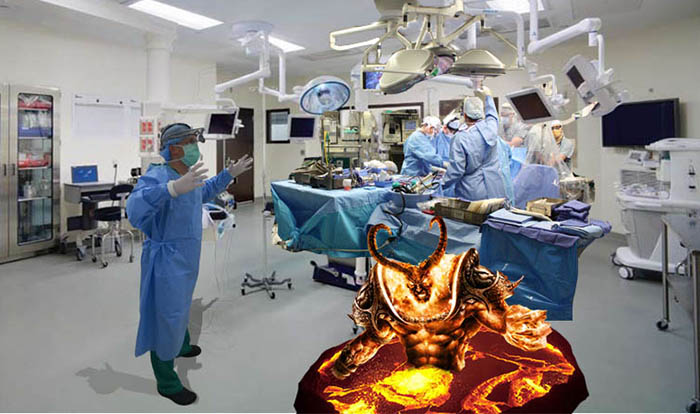 CHANCELOR, NC – Dr. Mathers, a surgical oncologist, decided to take on a pancreatic cancer patient whose cancer had engulfed a large portion of the liver.  This particular surgery is one of the most difficult procedures in modern medicine.  “I didn’t think anyone would operate on me, most doctors said I had about one month to live.  I have been blessed to have found Dr. Mathers,” patient Dan Johnson told reporters.

At first most people were confused at Dr. Mathers’ requests.  “He wanted many weird items in the OR prior to the surgery,” hospital administrator Chalmers told reporters.  “He asked for the eye of a wild boar, the root of a Brazilian halain flower, anise, jabe orb, among others.  Nineteen in total, which now we believe is based on the number burned alive at the Salem Witch Trials,” Chalmers stated.  “At the time we didn’t know what was going on.  He gets good results, what can I say?”

“We had to get human resources involved when he demanded the scrub tech be a virgin,” Chalmers went on to say.  The investigation stopped when Madison volunteered.  Dr. Mathers, not previously known for his Wiccan abilities, started the nine-hour procedure without any issues.

After about an hour into the initial exposure, he asked for the room lights to be turned down.  “He had me mix the ‘extra’ ingredients in a very particular order,” Madison the scrub tech recalled.  “I couldn’t follow the same recipe again, but as soon as he got through the fascia he started shouting out what ingredient to throw in the heated pan.  That eyeball was the worst!”

Once the mixture was complete and the room lights were down, Dr. Mathers began his chant.  “I can’t tell you what he was saying; I was in the middle of a level 5 Sudoku puzzle,” Dr. Fry the anesthesiologist told reporters.  “I did stand up when he was walking around the room and drawing a 5-pointed star with a circle around it [pentagram], on the floor, all in ChloraPrep.  That was a little odd.”

After a rumble, out of the now molten floor arose -what we now know as – the Dark Lord Xepneumotep.  Dr. Mathers clearly explained where he was in the procedure to Xepneumotep and the difficulty he was about to encounter.  Xepneumotep laughed in a sulfur-filled breath, “Mortals.”  The two quickly began to work.

“As scary as Xepneumotep looked and sounded, and he was scary – I peed my pants a little – he was very professional,” Madison stated.  Dr. Fry on the other hand was in shock.  “In my seventeen years of anesthesia I have never seen something like this.  I arranged my syringes as crosses.  I changed the electronic medical records to make crosses instead of dots.  I even injected myself with metoprolol.”

After a few hours Dr. Fry warmed up to the surgical assistant.  “You mean Xepneumotep  Yeah, for a Dark Lord, he was very competent.  I wonder if he is available for difficult IV sticks?”

The hospital administration huddled outside of the OR peering through the window in their white bunny-suits.  “Is he even credentialed to work here?”  An unknown hospital administrator said, but quickly disappeared when Xepneumotep turned his head… as if he heard, somehow.

The nine-hour surgery finished in four.  The Dark Lord was very pleased.  In a loud, soul-piercing voice he exclaimed, “I’ll wait until frozens come back, but I know we got all the margins.”  Another fifteen minutes passed without a phone call.  Xepneumotep’s dark skin started to separate and his molten inner core was began to show.  He screamed in a bowel-shaking roar at the circulator to get pathology on the phone.  Circulating nurse Jane said, “Boy that Dark Lord sure has temper on him.  I would hate to have been that pathologist.  Xepneumotep got very personal.  He threatened to bring back his daughter’s severe asthma, which she had out-grown, if he didn’t get the results back quickly.”

Jane stated that Xepneumotep went on and some of the things that were said toward Dr. Booth were too personal to be repeated to the press.  At the time of this printing she had “written-up” the Dark Lord.  The pathologist, Dr. Booth, was surprised to have been able to finish with tears in his eyes.  “I have never been that scared in my entire life.”  Dr. Booth is currently on leave.

Dr. Fry, the anesthesiologist, dismissed Dr. Booth’s complaints.  “In Xepneumotep’s defense Dr. Booth was taking a long time.”  Dr. Fry concluded: “I went to med school with Chris [Booth], he was always a little off.  Xepneumotep wasn’t that bad, there are surgeons here that are a lot worse, and they couldn’t hold a candle to the Dark Lord’s surgical skills.”