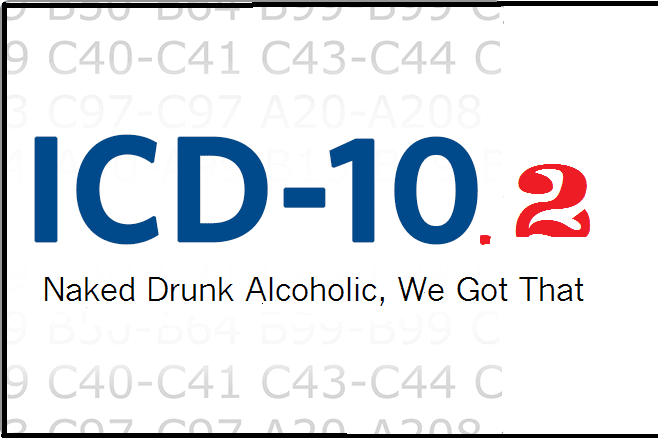 WASHINGTON, DC – The much anticipated ICD-10 implementation in October 2014 will have new competition.  Even before the official release of ICD-10, the International Statistical Classification of Diseases and Related Health Problems (ICD) is working on an updated version, ICD-10.2. 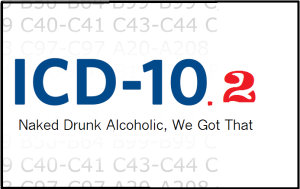 The new updates are being tailored to a changing medical world.  Major updates will include numerous realistic medical situations as The Happy Hospitalist has gone undercover to bring GomerBlog some of the new additions.  Here is a partial list:

There will be new codes for pain greater than 10/10, with the scale now moving to 20 out of 10 pain.  The common chief complaint “I need that drug that starts with D” will now have a code as will “allergies too numerous to list all” encompassing a new IgE-mediated disease.

“Our favorite new code will be for those naked drunk alcoholics that rip out their ET tube and leave AMA,” says ER physician Dr. Joanne Simon.  “It happens on a weekly basis here and I had no clue what to code for that, until now.”

“We wanted to design codes that meet the needs and demands of our patients and hospital providers,” said Anthony Drudden, ICD spokesman.  “ICD-10.2 will hopefully cover all of those patients that you just can’t seem to find a good code for.”

In addition, it was felt that medical coding was just getting “too easy” and that hackers could easily break in and change codes, costing medical insurance companies billions of dollars.  Computer programmers have advocated using Egyptian hieroglyphics to make hacking and manipulation of codes by rouge office staff or eastern European hackers much harder.  ICD-10.2 will add these hieroglyphics to the end of the codes to battle these current issues.

“Plan on your hospital staff leaning Egyptian hieroglyphics on their downtime, or just hire people well versed in them,” said Drudden.

A special thanks to The Happy Hospitalist for bringing this new report to our attention.