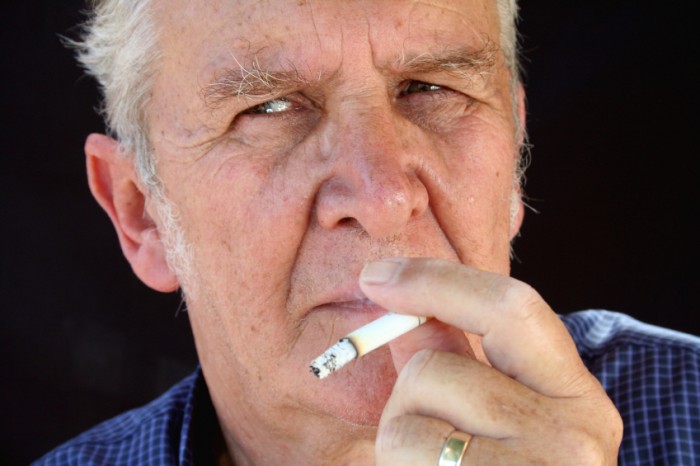 CINCINNATI, OH – Local resident Charles Shoemaker has decided to stop smoking the day before his total knee replacement.  “I’ve heard there are many adverse complications with people who smoke, so I have decided -with much consideration and discussion with my family – that I will quit smoking,” Shoemaker told reporters.

This decision is absolutely earth-shattering.  Charles has been smoking 2 packs per day since his early teens.

“I have decided to quit this terrible habit.  I don’t want anything to go wrong with this knee replacement,” said the man whose pack-year history is greater than the age of our country.  He continued on to say how he was excited to stop his Advair and Proventil.  “I can’t wait to get my life back.”

Initially Mr. Shoemaker tried to keep this unprecedented decision under wraps.  Dr. Fry asked Charles, “Do you smoke?” and Charles responded with a simple, “No.”  Dr. Fry told reporters, “When I entered the hospital room it smelt like I was in a bowling alley.”

When the patient was further questioned why he was on albuterol and Spiriva he said he used to smoke but quit.  “Oh, OK, when did you quit?” Dr. Fry asked.

“Yesterday,” Charles responded.  “I haven’t had a cigarette in almost 24 hours so I should be good to go for the surgery.”

Dr. Fry did everything possible to hold in the “you are kidding me” voice that popped in her head, and according to eyewitnesses she did just that.

Marlboro sent a representative to visit Charles in the hospital.  “We are not trying to convince him to change his mind, we are just thanking him for all these years of loyal service.  He is a true Marlboro Man,” the representative said.  He was seen holding a gift basket full of fruit and cigarettes.