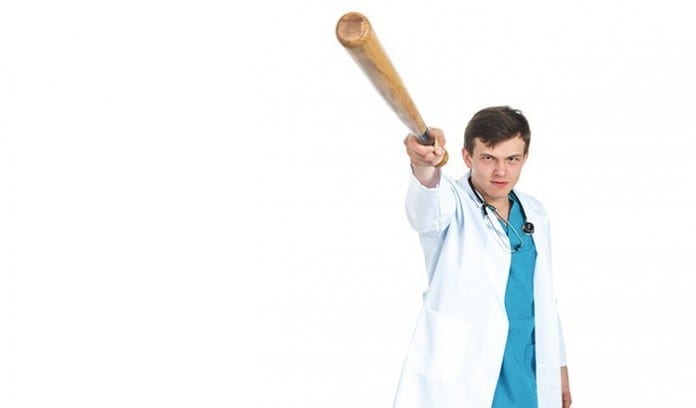 FRESNO, CA – Having just completed his intern year, medicine resident and former collegiate shortstop Logan Myers is brimming with confidence.  “Man, during my rookie year, I didn’t know Lasix from lidocaine.  But I brought my A-game and made the cut to the senior squad.”

During morning rounds, new intern Greg Linner was baffled by the diagnosis of an overnight admission.  “This is a 43-year-old male on chronic narcotics who presents with abdominal pain,” starts Linner.  “He was initially seen-”

“C’mon bro,” interrupts Myers.  “This is a chip shot.  I’m gonna roll the dice and say he’s constipated.  I’m calling in the special teams for disimpaction.”

As rounds continued, attending Dr. Esteban Lowrie decided to pimp the team.  “Okay, interns, what’s on the differential for chest pain?”  While the puzzled interns feverishly searched their tablets, Myers spoke up and leaned into the spontaneous circle the team had formed.  “Okay, guys, time to dig deep.  We’re gonna go the distance on this one.  You’re backed up against the ropes but you gotta want this.  It’s all you.”

“Acute myocardial infarction!” shouted medical student Lisa Sullivan.  “Boom!  You knocked that one out of the park!” replied Myers as he gave her a high-five, varying from the usual ass-slap he gives his male colleagues and avoiding a potential sexual harassment suit.

Frustrated senior resident Marla Reagan isn’t amused.  “He’s taking it way too far.  It was fine at first, but now he’s not even making sense.  Plus he wasn’t even that good of a baseball player.  He was riding pine at every game I ever saw.”

As the team rushed to the patient’s bedside, the nurse filled them in.  “64-year-old male in septic shock, on 2 pressors and is now in v-fib arrest.”

“I’m the code leader,” exclaimed Myers.  “We could swing for the fences and add a 3rd pressor.  4th quarter, down ten, 3 minutes to go.  But we’re up against a full court press, and we don’t even have the possession arrow.  We could throw a Hail Mary and intubate, but there’s no playbook that’s going to save him now.”  Myers referring to the rhythm, and the low likelihood of survival.  “My gloves are off, and I’m ready to quarterback this thing. But I’m afraid the clock is winding down on this one.”

“Jaaaahust a bit inside,” he commented as he hit the carotid artery while placing the central line.

“The fat lady has left the building.”