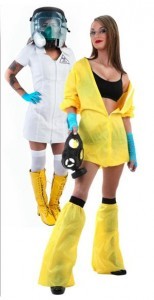 MOBRIDGE, SD – The nation breathed a sigh of relief today as hordes of sexy Ebola nurses were released from the place of quarantine in Mobridge.  These nurses were placed in isolation after being discovered sprawled out in various street corners, taxis cabs, and dorm hallways in the early morning hours of November 1st.

When initially questioned, these sexy Ebola nurses complained of symptoms including headache, vomiting, and poor recollection of the evening prior.  The CDC lobbied hard for immediate quarantine of these scantily clad nurses.  “It was shocking,” said CDC official Sally Mavis.  “Many of these nurses were discovered with vomit on their sexy Kevlar-lace bras.  We had to move quickly.” Interestingly, the group was composed of 245 attractive women in their 20’s, and 81 well-groomed men.  “We were hoping that studying this demographics would tell us who truly is high risk for contracting Ebola,” said Mavis.  Fortunately, none of the 326 nurses developed more telling signs of Ebola and were therefore released.  “Although many were treated empirically for PID,” said Mavis.