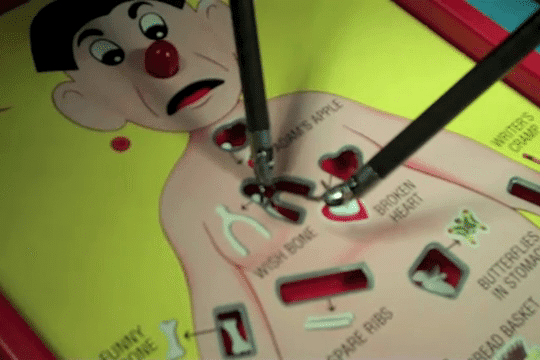 PHILADELPHIA, PA – In stark contrast to the recent stringent and controversial criteria for Maintenance of Certification (MOC) set by the American Board of Internal Medicine (ABIM) for internists and subspecialists, the American Board of Surgery (ABS) announced last week that it is replacing qualifying and certifying exams for surgeons with the board game Operation.

“The ABIM really upset their doctors with the MOC changes, so we decided to learn from that experience, take it in another direction, and make it less serious and more fun!” explained ABS spokesperson Brock Forceps, as he removed a Charley Horse with intense focus and precision.  “Who doesn’t love a game of Operation?!”

“I had removed his Adam’s Apple and Wrenched Ankle within the first ten minutes,” said general surgeon Erica Bovie.  “It seemed like smooth sailing.  But just when I thought I had his Wish Bone, the buzzer went off and Sam’s nose turned red.  I was so ashamed!”  Though Bovie was offered the opportunity to take the exam again, she respectfully declined and instead plans to repeat her surgical residency and retake the exam in five years.

“I went for the Spare Ribs, Broken Heart, and Butterflies in the Stomach,” said vascular surgeon Jason Retractor, still perspiring.  “I know this is a game and all, but man, I was more nervous than my first trauma case!”

“I’m jealous of these surgeons,” said internist Christopher Booksmart, who was consulted by Retractor for medical clearance prior to his exam.  Booksmart recommended placing two AA batteries before proceeding with Operation.  “I wanna play!”

Though surgeons are generally in favor of the new board certification system, calling it “fair and fun,” some admit the $4,000 exam fee is a bit much.

“I’m pretty sure the original board game didn’t cost that much,” commented pediatric surgeon Joanna Staplegun.  “YES!  I got the Writer’s Cramp!  I’m on FIRE!  What should I do next: the Funny Bone or Brain Freeze?  OHMIGOD!  I LOVE THIS GAME!!!”