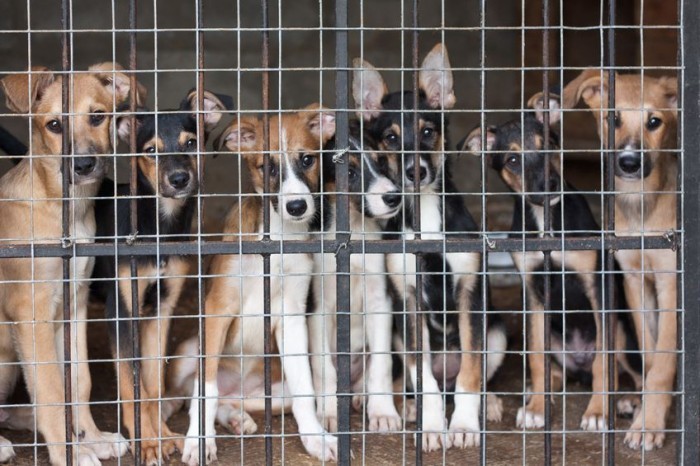 DURHAM, NC – A local veterinary ER is currently open but essentially non-functional, as 8 of its 10 treatment rooms are occupied by suicidal dogs awaiting placement to inpatient doggie psych hospitals.  With only two rooms to evaluate medically ill or injured animals, the waiting room is bursting at the seams and getting rowdier by the minute. 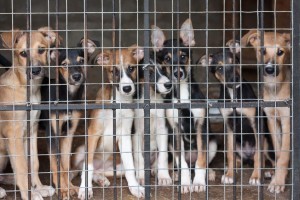 Jimbo, a 7-year-old boxer who was found drinking anti-freeze, has been held at Furry Friends Animal Hospital for twelve days while awaiting placement.  A small stray terrier mix, named Sally by the staff, hasn’t had any better luck finding a Canine Psych Hospital to accept her, either.

She was found attempting to run into the path of an oncoming train, and so was taken to Furry Friends by county Animal Control on involuntary commitment papers.  She has been held in the same treatment room for eight long days.  Rocky, a 3-year-old Dalmatian, should likewise expect a long stay at Furry Friends after his owner yesterday found him attempting to climb into a full bathtub after first knocking a hair-dryer into it.

Anne Massey, DVM, is a vet employed by Furry Friends.  GomerBlog spoke with her yesterday about the current crisis at her clinic.  “It is a war zone here,” she explained.  “Ever since EMTALA was extended to include veterinary hospitals, we became the place to send the animals no one wants to deal with.  I mean, we don’t provide psychiatric care here, so what good does it do the mentally-ill animal to sit here for two weeks and be treated like a prisoner?  We are the only place who can’t say no to any animal now, so this is where all the undesirables wind up.  We are doing nothing for the mentally-ill animals, aside from boarding them.  Meanwhile, they render us unable to care for the medical and trauma patients.”

She went on to describe how the psych holds can be quite disruptive to the staff and other patients.  “The incessant loud barking, howling, attempts to attack staff, and attempts to escape make this seem much more like an animal penitentiary than a hospital.  Jimbo over there likes to walk to the door of his cage and lick himself for everyone to see.

Rocky has already bitten a staff member and tried to hump her leg, and he has only been here a day.  Plus, some of these animals are clearly just abusing us since we can no longer turn them away.  I really think that little stray Sally was just hanging around the railroad tracks trying to convince people she was going to run in front of a train so that Animal Control would get called and bring her here.  She gets two meals and a warm room, and never has to worry about being euthanized like she would if she were at the animal shelter.   I can’t say I blame her – as bad as it is here, it is better than starving on the cold
streets.

“Emergency veterinary medicine is headed for a disaster, for sure.  It is a setup for failure.  We can’t refuse anyone, can’t discharge our psych dogs, but can’t place them either.  It doesn’t take a veterinary brain surgeon to figure out what a model like this does for wait times and crowding, let alone outcomes and satisfaction.”  Massey let out a sigh of exasperation, then lamented, “I need a cigarette, and I don’t even smoke.”