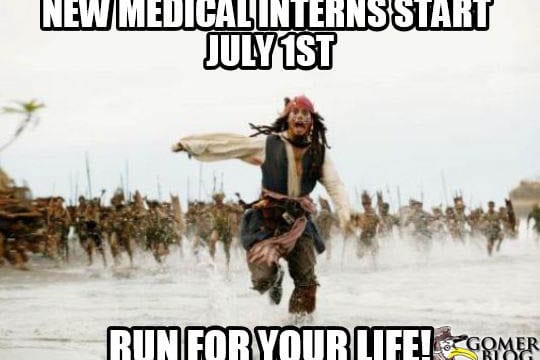 “Our new initiative is the culmination of a 10-year research project looking at new medical interns and residents who start working in teaching hospitals in July,” says Dr. Walter H. Oscar, CEO of the Doctors University Hospital (DUH).  “We looked at month-by-month hospital complication rates, and our results were consistent: July is when everything hits the fan.” 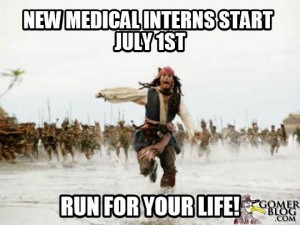 “At that point, the solution was obvious,” Dr. Mario stated.

This year, DUH eliminated July from the calendar altogether.  The results of the project have been astounding.  In 30-day follow-up, the hospital’s mortality rate was down a full 3,000%.  The hospital has seen virtual elimination of its most severe complications.

The benefits of the initiative have extended to other areas besides patient care. One spokesman for the laundry staff said, “We’re the guys who wash scrubs after call nights and, well, let’s just say we’ve noticed the scrubs are less stained in the seats since we got rid of July.”  The hospital cafeteria has noticed a surplus of food thanks to the curtailing of July stress eating.

Dr. Barry Pepper, CEO of a large private hospital system in direct competition with DUH, says, “We are just flabbergasted.  We were neck-and-neck with DUH in all areas of quality.  We were giving them a run for the money in achieving patient-friendly, baby-friendly, and drugseeker-friendly status.  We were close to achieving Magnet designation.  But then DUH achieved July-free status, and it just blew us out of the water.  How do you compete with that?”