ALBANY, NY – A stack of unfinished charts.  Overturned juice boxes.  An exhausted young physician, asleep on her desk, is awoken suddenly by her pager.  These are the images you don’t see on her reality television show, but for Dr. Dottie “Doc” McStuffins, they are a way of life, and they are taking their toll.  In an exclusive interview, Dr. McStuffins opens up about her experience with physician burnout. 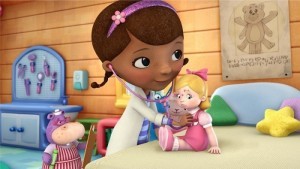 A former child prodigy, Dr. McStuffins famously finished medical school at the age of four, followed by a family practice residency at age seven.  Now, at the age of eight and three-quarters, she’s been in the medical field for most of her life.

“I knew when I chose this career that it would be challenging,” she says.  “That’s kind of why I went into it, after all.  But it builds up.  Day after day, week after week.  Late nights, overtime on weekends.  And with the cameras always on, I just never get a break.”

As the only physician in a busy rural practice, it isn’t easy for Dr. McStuffins.  “There is no ‘call schedule,'” she says, “It’s me.  It’s always me.  Whether I’m at home, on vacation, or at a sleepover.  That’s one thing I think the producers have done a good job illustrating on my show.  I’m the one everyone comes to for help.”

On camera, Dr. McStuffins is cheerful, always willing to take on a new patient.  But behind that smile, she now says she is suffering in silence.  “In this profession, you have your highs and lows.  I guess one day, the lows just outnumbered the highs.  It wasn’t one thing.  I think that’s the myth about physician burnout: that it’s one mistake, one poor patient outcome that haunts you.  It’s more like a hundred small things.  A near miss, a rude patient, another day without lunch.  It wears you down.”

Each year, many physicians seek treatment for physician burnout.  But many more do not, fighting their fights alone.  “I needed to open up about this.  I need my colleagues to see that I’m working through the same issues they are.”  Interestingly, Dr. McStuffins is not the first child prodigy to experience physician burnout at a young age.  In 1993, another young physician and reality television star, Dr. Douglas Howser, faced similar struggles.  He eventually turned down a prestigious trauma surgery fellowship, leaving medicine altogether to pursue an acting career.