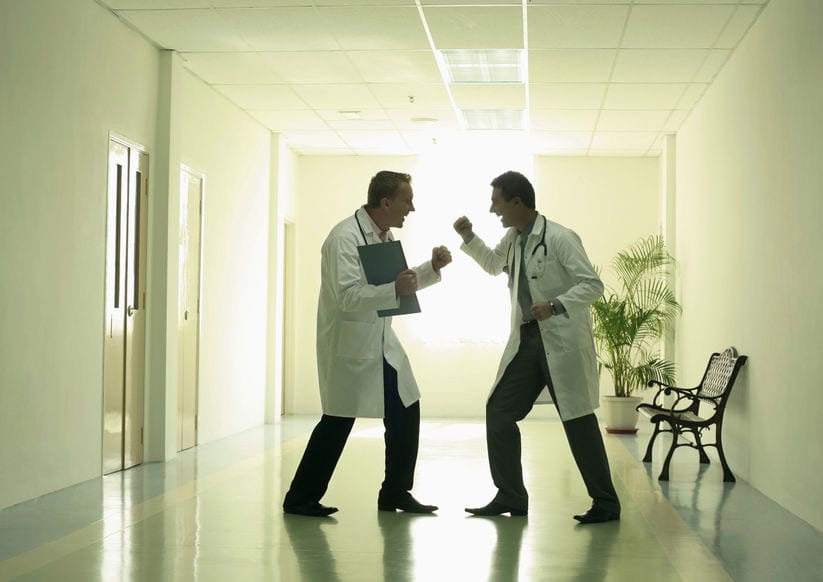 WASHINGTON, DC – Thousands of eye care providers were found dead in the streets Monday morning after a vicious battle erupted between ophthalmologists and optometrists in our nation’s capital.

The two groups share a long and contentious history, dating back to 1832 when ophthalmologists officially separated from optometrists, citing a desire to add an excessive number of consonants to their name.  “They wanted to appeal to a wealthier clientele, the bourgeoisie, who were also fond of superfluous lettering,” explained Alfred Hitchens, a medical historian.

Despite a long period of peace, tensions between the groups had been escalating in recent years.  Nobody is quite sure what started the bloodshed.  Early reports indicate it began when an optometrist named Ed Hicks called ophthalmologist Tom Ericson an “eye dentist.”  Ericson allegedly responded by calling Hicks an “eye dental assistant.”  From that brief verbal exchange, the conflict intensified quickly as hundreds of glasses-clad eye care specialists poured onto the streets of Washington, DC.

Passersby were unsure what to make of the event.  Barbara Davis, a local real estate agent, was part of the sizable crowd gathering to watch the events unfold.  When asked to describe the scene, Davis seemed unable to differentiate the two warring factions.  “Wait, the ophthalmologists, they do glasses, right?”  After being informed that both groups prescribe glasses, an ambivalent Davis shrugged and walked away.

Another witness described a chilling scene.  “They started off just shining really bright lights in each other’s eyes.  Then, they started clawing at each other’s faces.  There were broken glasses everywhere.  Each group had medics who were trying their best to refract the wounded, but they weren’t able to set up eye charts at an appropriate distance.  It was awful.”

Others reported witnessing horrific acts by both sides.  One bystander reported seeing an ophthalmologist perform LASIK on only one eye of an opposing optometrist.  The victim quickly developed a headache and had to lie down.  On the other side, optometrists were forcing their ophthalmology POWs to wear quadfocal spectacles, sometimes even quinfocals.  “Nobody can withstand that many focal points,” stated Nathan Shepherd, a local ophthalmologist and survivor of the carnage.

When asked if he thought the bloody melee was worth it, a smile spread slowly across Shepherd’s face.  “An eye for an eye makes the whole world need an updated pair of glasses.”