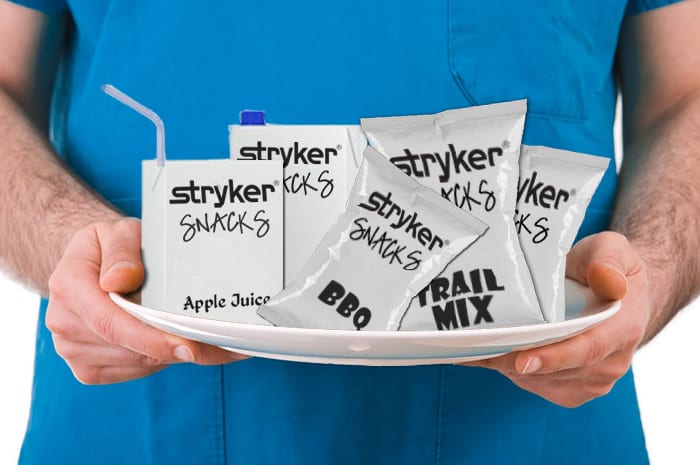 DALLAS, TX – Stryker Surgical just released a new line bound to please every orthopedic surgeon, anesthesiologist, CRNA, OR nurse, surgical tech, and yes, even make the general surgeons happy too.  They’re called Stryker Surgical Snacks®.  Snacks specifically designed for the sterile environment of the operating room (OR) and they are scrumptious.

Long case?  Instead of breaking scrub to get that drink of water and a quick bite, re-scrub in, and get back to the operation, Stryker Surgical Snacks® will be right there for your pleasure.  “We advise that you throw a stitch, eat a chip, and repeat,” John Bokamp, a Stryker rep, told reporters.  “We also promote stopping massive bleeding before you dig your surgical hands in a bag of Nacho Cheese Chips, but we are seeing surgeons with one hand putting pressure, the other snacking away.”

“This will save hospitals millions of dollars,” Mr. Bokamp continued.  “It saves valuable time, surgical gowns, and sterile gloves!  Plus makes the OR happy.  Not to mention they are DELICIOUS!”

Currently Stryker Surgical Snacks® come in a white package so you don’t confuse them with ordinary snacks.  Bringing in outside food in to the sterile environment of the OR would be a disaster.

“Last case I was really craving Stryker Trail Mix® but the patient had a peanut allergy,” Joe Rose, an orthopedic surgeon said. “I asked for a Strykers Bar®” (caramel, peanuts, and nougat dipped in chocolate, their version of a Snickers Bar®) “but it has peanuts too!  Dammit.  So I called in the Stryker rep and asked what other options I had.  He recommended Nacho Cheese Chips, as they would pair perfectly with my Stryker Apple Juice®.  Cool, right on again Stryker-Man!”

Surgical techs love the Stryker Surgical Snacks®.  “I haven’t had a break in weeks!  I’ll stand there munching on my Stryker Trial Mix® while Dr. Gregory sits in that Da Vinci for 8 hours,” Jessica Stannis, a surgical tech, told reporters.  “The surgeons are less cranky, I’m energized, and between you and me I’ve gained 3 pounds!”

The source of the typical surgeon rage was narrowed down to hunger.  Operating rooms that have Stryker’s Surgical Snacks® on formulary have a 35% decrease in rage and a 15% increase in efficiency.

“Last week we opened 12 different bags of chips, none were the BBQ flavor that I wanted for the case,” recalls Dr. Gregory. “Finally we called in the Stryker rep and complained.  He promptly found us the BBQ chips and didn’t charge the patient for any of the unused snacks.”

Stryker not only recommends their snacks for the OR but also the OB suite during those long postpartum tears.  “Fourth-degree tear?  Gonna be there for a while?  Grab a Strykers Bar®,” said Stryker rep John Bokamp.  “We also suggest snacks in the colonoscopy suite during those longer colonoscopies.  A scope in one hand, and our signature mesquite BBQ chips in the other!”