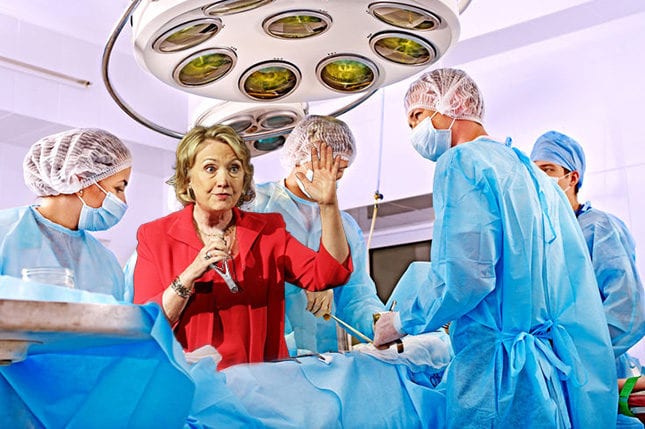 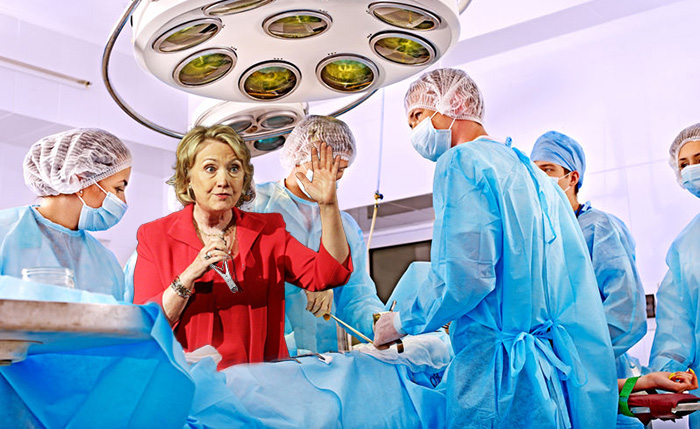 WASHINGTON, D.C. – A shocking story coming from Bethesda Medical Center, where Hillary Clinton has been wearing a pantsuit in the operating room.  She refuses to wear scrubs, a scrub cap, surgical mask mask, or any proper surgical attire.  “It was more convenient,” said Dr. Clinton.  “I mean I have work clothes, personal clothes, just too many clothes.  I decided to just have one set of clothes.”

This move is truly unprecedented.  “I saw her standing there with a rongeur in an un-gloved hand, wearing a red pantsuit!” general surgeon Dr. Fields told reporters.  “I thought, ‘Oh boy, this is a clear violation of hospital policy.’  At least wear sterile gloves, have some security from bacteria transmission!”

When the hospital administration was notified of this break in protocol they responded: “Dr. Clinton showed extreme carelessness in her judgment to wear a pantsuit in the OR, and may have contaminated many patients in doing so.  At this time we see no reason to suspend her operating privileges.”

Many OR personnel that have been reprimanded in the past for smaller infractions, were upset.  Scrub tech Christi Diller said, “It’s like she plays by different rules.  I forgot to double glove and I was put on administrative leave for a day, plus came back to work nights!”

CRNA Debbie Summers complained, “Usually the infection control officer will ding you for wearing a mask out of the OR!  Cross the OR’s sterile red line without a surgical cap, and you could be suspended.  She did all of this and more – nothing.”

A patient ended up getting the new multi-resistant Russian super bug.  Dr. Clinton denies she was the source of the post-surgical infection.  “There’s no way to prove that the bug came from me, and my decision to wear my own surgical attire,” Dr. Clinton said at press time.  “I was sterile at the time.”

Dr. Clinton is still allowed to operate as of this article’s publication.  She has agreed to at least wear a blue or green pantsuit to blend in better.  The hospital released a statement stating, “When our other surgeon has tiny hands, is loud, bombastic, and doesn’t know the difference between a gallbladder or an appendix, what choice do we have?”