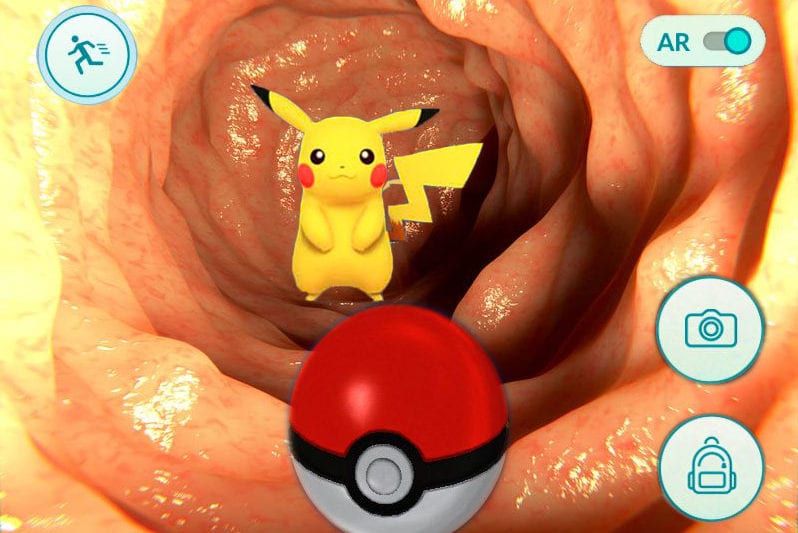 ENDOSCOPY SUITE 9 – On the heels of Pokémon Go’s release on July 6 that signaled a comeback for the 1990s Nintendo franchise, GomerBlog is on hand to report that gastroenterologist Jonathan Wilcox has found Pikachu lodged in a man’s sigmoid colon during a routine augmented-reality colonoscopy today.

“This gentleman has been having bright red blood per rectum, iron-deficiency, and he just turned 50, so he was due,” said Wilcox, unable to suppress a smile, admitting this was the first Pokémon he has caught, either in real life or during colonoscopy.  “He was the last case and I had heard about this Pokémon Go craze, so I figured I’d take a look and, well, what d’ya know?  Freaking Pikachu is right there!  In the sigmoid!”

Ever since its release, Pokémon Go has soared in popularity, with people exploring the real world trying to find these cartoon monsters lurking in parks, restaurants, even restrooms.  However, Wilcox was the first to both look and find Pokémon in a patient’s colon.  And boy was he glad.

“If there’s one thing I’ve learned in medicine, it’s to keep your differential diagnosis nice and long,” explained Wilcox, realizing this colonoscopy will change the course of video game history.  “I was thinking maybe AVMs, diverticulosis, even colon cancer in this guy, but now I know better.  Next time you have a patient with a GI bleed, think about Pokémon nibbling on intestinal mucosa.”

Wilcox opted against Poké Balls and relied instead on his years of endoscopic training.  He captured Pikachu via snare polypectomy, a technique typically used to remove large pedunculated polyps.  Wilcox did not report any other Pokémon in the transverse and ascending colon or cecum.  Pikachu will be sent to pathology.

“This is going to be one weird but awesome procedure note,” Wilcox told us as he was about to dictate his endoscopy findings.  “Do you think I should recommend EGD and pill endoscopy?  There might be some rare Pokémon to uncover!”  Wilcox is absolutely looking forward to searching more rectums for these fun little creatures.  “But not hamsters though.  That’s disgusting.”