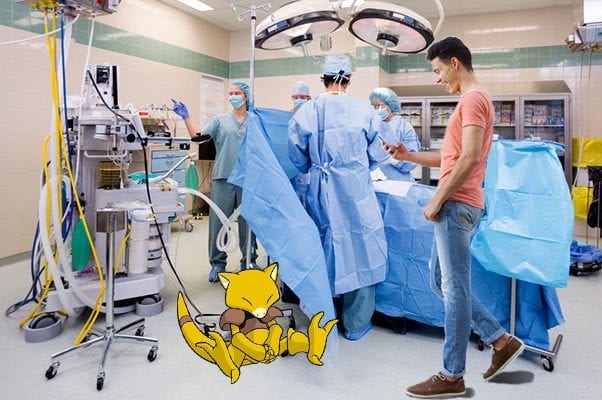 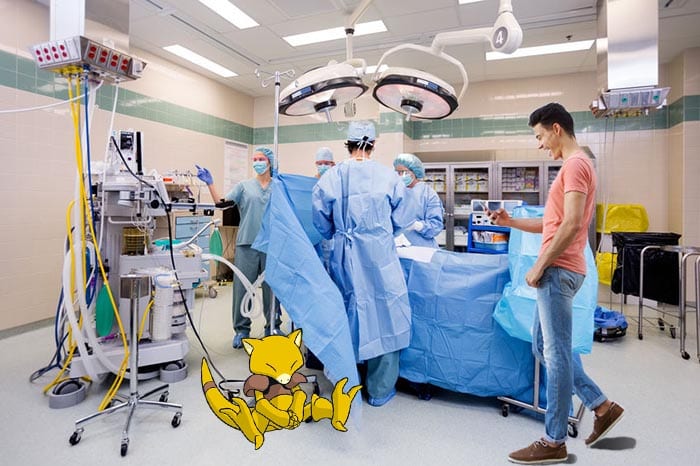 CHARLOTTE, NC – Local man, Danny Nguyen, wandered into St. Elizabeth Hospital’s operating room chasing down a rare Pokémon: Abra. “I had no idea where I was,” stated Danny. “I knew Abra was nearby and I had to be extra sneaky. Last time I was even close he teleported before I could throw a Pokéball. This time I loaded up on some stronger PokéBalls and set out.”

OR 8 was all in shock when a man dressed in jeans and T-shirt wandered into the operating room. “I looked up and there this dude was, dressed in regular clothes,” said OR nurse Jane Watts. “I asked in my best nurse-voice ‘What, do you, think you are doing in here!’”

Danny responded, “Shh… its ok I’m trying to catch Abra.” Without ever looking up.

CRNA Janelle Wheeler told reporters, “I was giving Mark a break while it happen. When I went to the next OR to tell the story, Dr. Finch just broke scrub and left.” Referring to General surgeon Dr. Adam Finch, who has been trying to catch Abra for a long time.

Word started to spread quickly about OR 8’s Pokémon, and a Code Victory was called overhead. Code Victory is a new informal code to alert hospital staff when a rare Pokémon is spotted in the hospital. Many providers left patients in rooms.

When the patient was interviewed about the incident he only responded “Was he able to catch him?!?”