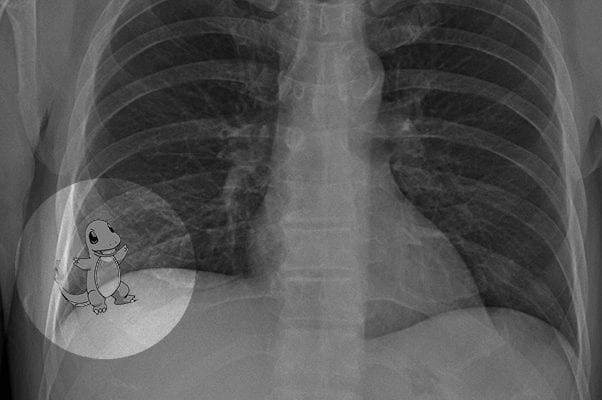 The Pokémon, a Charmander, was sitting in plain sight of the radiologist, who witnesses claim had no excuse for such a crucial error.  Tom Carter, a 26-year-old resident couldn’t believe the well-respected attending could make such a bone-headed mistake.  “What the hell was he doing?” exclaimed Carter.  “Not moments before he had diagnosed a ridiculously small lung cancer.  Then he misses an obvious Charmander, just sitting there above the diaphragm?  It’s got teeth and a flame on its tail for Christ’s sake.”

When informed that he had overlooked a readily apparent Charmander, the 62-year-old Hoskins responded, “I missed a what?  Is that some kind of toilet paper brand?  Did that patient aspirate toilet paper?  Did anybody clinically correlate that?”

Hoskins isn’t the only radiologist who has overlooked in vivo Pokémon in recent days.  A neuroradiologist missed a fully-evolved Golem in a patient’s third ventricle, a mistake which nearly killed both the patient and the radiologists’ chances for a complete Pokedex.  Another radiologist mistook a mature Dewgong for a stage I seminoma on ultrasound, resulting in an unnecessary orchiectomy when a simple Poké Ball would have easily captured the aquatic beast.

Some are frustrated by the Radiology Department’s complete ineptitude when it comes to diagnosing and capturing Pokémon on standard imaging modalities.  “I sat here and watched one guy scroll right past a Diglett on an abdominal CT,” said Carter.  “I said, ‘Hey!  Did you not just see that Diglett?!’  He said it was an enlarged lymph node.  Now that patient is getting radiation and chemotherapy.”

The problem appears to be spreading to other parts of the hospital as witnesses report seeing a pathologist miss a Jigglypuff on a peripheral blood smear.

We hear Pikachu is appearing in colons.