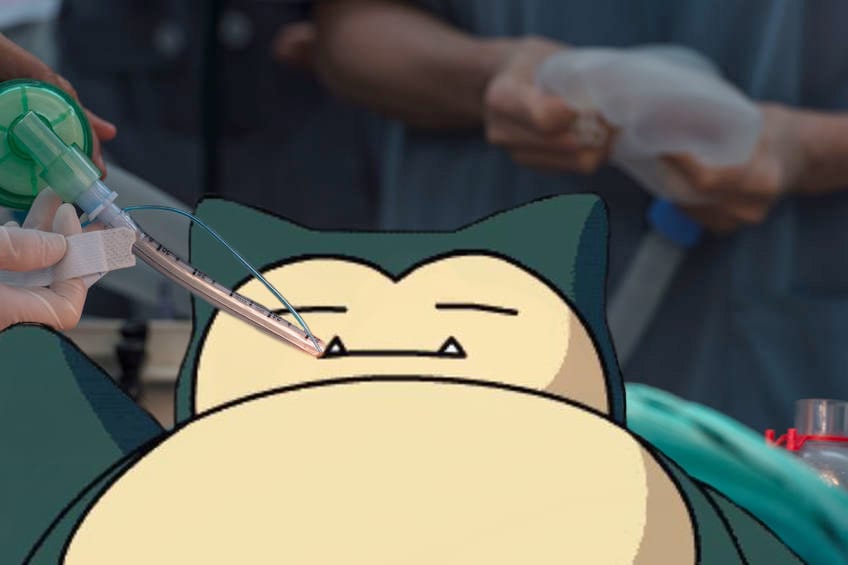 ATLANTA, GA – Anesthesiologist and Pokémon Go addict Tobey Matthews was using augmented reality to explore life on the other side of the anesthesiology drape when he spotted Snorlax in an adjacent operating room.  Joy turned to grief when he realized Snorlax was apneic and cyanotic.  Thankfully, Matthew acted quickly and intubated Snorlax for airway protection.

“I must admit, I was nervous,” recalled Matthews.  “I’ve never had to intubate a Pokémon, let alone The Big Fella.”

To those unfamiliar with this Pokémon, Snorlax is a morbidly obese (BMI of infinity) blue-green bipedal creature that is almost certainly diabetic and hypertensive due to his propensity to eat 400 kg of food at a time when not unconscious from a food coma.  His lipids are uncontrolled despite max-dose therapy with a statin, fibrate, and niacin.  Though he has been diagnosed with obstructive sleep apnea (OSA), he is notoriously noncompliant with his CPAP.  His pointed ears are small such as to ignore dietary advice and his two sharp teeth in the lower jaw are key to devouring Big Macs.  He uses his claws primarily to scratch areas afflicted with intertrigo.

Matthew says that when he spotted Snorlax, he did what any sensible human being or medical provider would do: try to awaken the oversized cartoon beast with a Poké Flute or Pokégear set to the Poké Flute Channel.  That and slap him in the balls.

“When his respiratory rate dropped to 1 breath per minute despite those interventions, I knew something was up,” continued Matthews, noting he accidentally charted a respiratory rate of 16.  “I called for help immediately and before all was said and done, we had thrown in an endotracheal tube.”

According to Matthews, Snorlax has been bucking the vent and has an “unsettling feeling” that this Pokémon will fail his spontaneous breathing trials.  “This was my first time intubating a Pokémon, I don’t even wanna think about putting a trach.”  Members of the ICU team are attempting to locate family members with their Pokémon Go apps.  Snorlax is a full code.