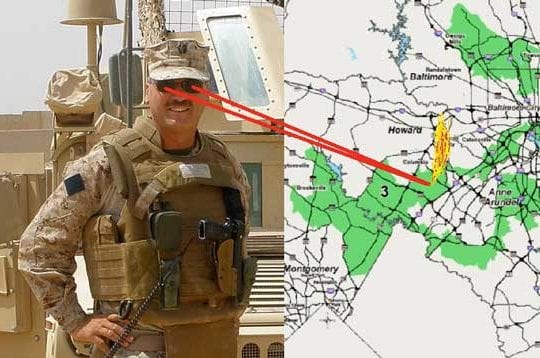 ANNAPOLIS, MD – The CDC is warning the public that a new super bacteria has been identified in Maryland that is resistant to every known antibiotic.  Officials and scientists are on heightened alert and scrambling to discover a potential treatment.  Strangely the bacteria bears a striking resemblance to the shape of Maryland’s 3rd congressional district.

CDC spokesman, Dr. Leonard Williams stated, “This bacteria takes on a random shape with two large spirochetes and hyphae branching out from its main body.  It almost looks like one of those Rorschach psychological pictures.  We have never seen anything like it.”

With antibiotics completely ineffective, officials in Maryland have turned to an unconventional treatment method; employing Navy Veteran and Emergency Medicine physician Dr. Mark Plaster to take on the bacteria.  Dr. Plaster enthusiastically accepted the challenge and is already hitting the streets in the battle of a lifetime, recruiting veterans from across the district to assist.

While deployed to Iraq and eating MREs, Dr. Plaster acquired several superpowers including but not limited to laser firing eyes, fingers that can produce chlorine, and the ability to create fireballs from his hands.  “I remember one night in the tent during a sandstorm a camel spider bit me,” proclaimed Plaster.  “Ever since then I have had these incredible powers.”

“Dr. Plaster’s unique abilities and superpowers were almost custom made to take on this new threat,” stated Williams.  “It’s like we are putting him into a basketball game with 10 seconds left to make that desperate 3-pointer, and I think he will be victorious!”