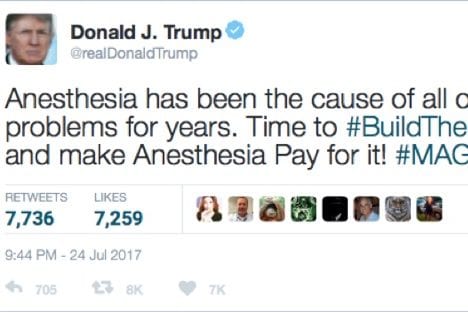 WASHINGTON, D.C. – Publicly acknowledging that efforts to build a border wall and have Mexico pay for it has failed, President Donald Trump has tweeted his thoughts on a new Plan B: Have anesthesiologists build an epic border drape wall and then make them pay for it.

“The President is on to something,” agreed Senator Chuck Schumer.  “Anesthesiology is at fault for everything but are never been held accountable.  It’s about time anesthesiologists put down their puzzles and puppet shows and put in some hard labor and build the border drape wall.  Trump gets his wall, anesthesiologists learn their lesson, and I think everybody wins.”

As much as they disagree, the American Society of Anesthesiologists (ASA) understand everyone else’s point of view.

“Look, if we had to put up a drape for every single thing we’ve been blamed for, yeah, that would be enough to make a border wall,” explained President of the ASA Dr. Jeffrey Plagenhoef.  Though he was initially concerned about Trump’s insistence on anesthesiology paying for the border drape wall, the ASA President knew it was an empty threat.  “The President of the United States knows full well that our drape supply is infinite.  It won’t cost anesthesiologists or taxpayers a single cent.”

Plagenhoef has already tapped anesthesiology drape specialist Ryan Grossman to lead the construction of the border drape wall.  Grossman is the man behind the world’s most epic drape fort located in Atlanta, GA, which is 6 feet tall, 6 feet wide, and 75 feet long.  It is listed as one of the Seven Wonders of the Medical World.  Anesthesiologists all over the world have flocked to Atlanta during long cases to see the medical marvel with their own eyes.

“It’ll be a long, arduous project, but I think we’re up to the task,” Grossman told Gomerblog in a phone interview while overseeing a lap appy.  “Schedule us for a few Whipples and we’ll get that border drape wall up in no time!”