WASHINGTON, D.C – The U.S. Surgeon General accidentally revealed in a recent interview that President Trump’s skin tone is actually a normal shade of Caucasian. The orange hue of his face is actually due to daily ChloraPrep application after a brow lift he had performed early in the 2016 Republican Presidential Primary. 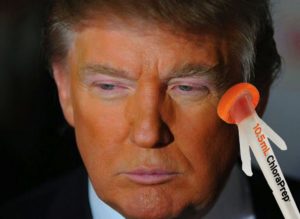 The newly appointed Surgeon General Dr. Adams was being interviewed about a public health initiative when he revealed that one of his daily responsibilities is to apply a fresh coat of the orange tinted chlorhexadine usually reserved for pre-operative surgical prep. “He loved the way his face shined after surgery and asked if he could look like that all the time. When I told him it was an antimicrobial skin prep, he said he never liked microbial skin preps anyways.”

Dr. Adams relayed that the president’s staff carries a case of ChloraPrep applicators every where they travel with the President. “We’ve used an average of 2.6 applicators a day, way more than that when he is going to be on TV. He believes that the population relates to it, President Trump believes that this specific shade of orange reminds people of Cheetos, Doritos and Tang. The flavors of a happy childhood he claims.”

When questioned about the source of his skin tone, President Trump was elusive “Its my natural skin tone. That ChloraPrep story is #FakeNews . The Left is just jealous of my Chester Cheeto glow!”