ORLANDO, FL – In one of the most selfish acts of which Gomerblog has heard in recent memory, a 72-year-old male patient admitted last night to the 43 med-surg unit of Orlando Medical Center (OMC) had the absolute audacity to code right at 7 PM shift change.  Like on the dot. 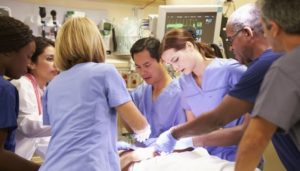 “I don’t want to speak ill towards the dead, which this guy technically is right now, but come on, what gives, man?  Well, besides your heart and lungs,” said rapid response nurse Ellen Offerman.  “Coding right at shift change?  Clearly this guy wants to be the center of attention.  Well, ask and you shall receive.”

Like at most other hospitals, 7 PM shift change here is considered a sacred time during which day staff are allowed to leave in peace while night staff slowly get into work mode.  A code at shift change violates this principle by keeping day staff longer and forcing night staff to be hypervigilant right from the get-go.  Health care professionals have a term for this: it’s called a clusterf**k.

“It… really… makes… you… appreciate… those… patients… who… code… in the… middle of the day… or… middle… of the night…” said daytime second-year internal medicine resident Jackson Riley while conducting chest compressions.  “So… many… notes… to write… still… so… tired…”

Though no one will say it, everybody just starting their night was thinking the same thing during this particular code: it’s totally going to be a full moon.  And it all started because of this selfish prick who couldn’t do this a little earlier in the day or a little later in the night.

After 15 minutes of CPR, the patient did have spontaneous return of circulation and was transferred to the ICU.  Citing the belief that “if we’re going down, we’re bringing everyone down with us,” the health care professionals present during the code made sure the patient was sent to the ICU with all iatrogenic tubes and wiring knotted into spiderwebs, requiring the expertise of bomb squads to disassemble.

“Good luck untangling all that!” said Offerman as she ran with reckless abandon towards the hospital exit.  “Let’s get the hell outta here!!!”  Offerman, Riley, and everyone else working days ran out of that hospital faster than Usain Bolt in his prime.  It’s unclear if they will return to work tomorrow.