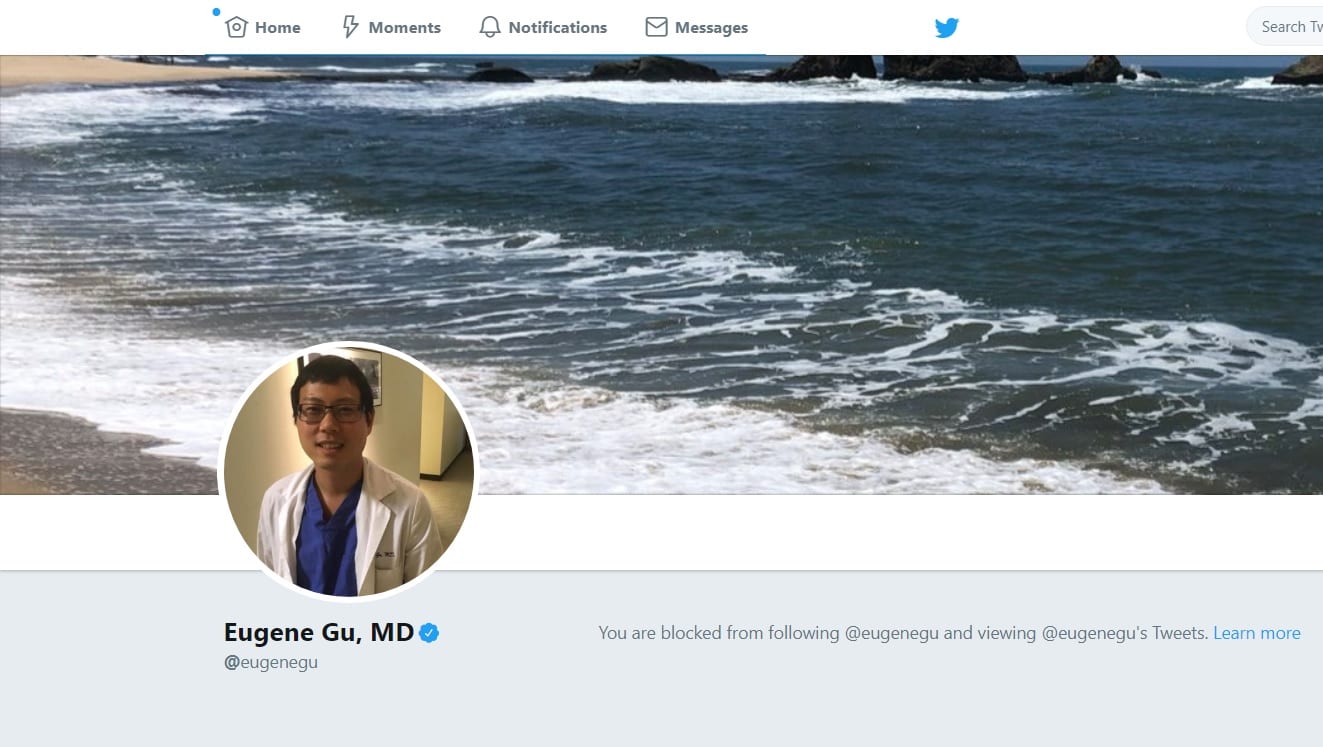 It turns out his contract was not renewed and this was based on his repeated bad-mouthing of his program and institution on social media. Apparently trashing your employer on Twitter and a performance resulting in significant concern in the areas of “patient care, communication, and medical knowledge” aren’t conducive to being carried further. Shocker.

After being released from the residency program, Dr. Gu has primarily been focusing on his social media work, specifically his twitter feud with President Donald Trump and even being accused of abusing his ex-wife, a claim backed up by a photo of his arrest record posted on Twitter.  Gu, like most domestic abusers blamed everyone but himself including “an aggressive lawyer.” Maybe true but suspicious even if that was his only accuser/victim…

Fast-forward to earlier this week when a post from Gomerblog’s own ophthalmologist extraordinaire Dr. Glaucomflecken posted a tweet saying he was taking a twitter break after being accused of being racist. This stemmed from a now deleted twitter account @MaryLaurymMD saying that Glaucomflecken’s  twitter avatar was a person in blackface and offensive.

Ironically, @MaryLauryMD should have been seeing an ophthalmologist instead of accosting one online since “she” was unable to see that the avatar is blatantly an ophthalmoscope with a tophat and a moustache-goatee combo. @MaryLauryMD then doubled down on the accusations that even tongue depressors can be racist.

Subsequently, the idiotic rantings were retweeted by Dr. Gu on his personal twitter account, @EugeneGu. Following this, there were several comments between Gu and Laury back and forth about how racist the ophthalmoscope picture is enraging social media justice warriors who cyber-bullied the good Dr. Glaucomflecken sufficiently that it prompted his twitter sabbatical.

The good people at #medtwitter, at least the ones not recently fired from their residency programs, united and ophthalmoscopes appeared as the twitter avatars on the accounts of hundreds of accounts of actual doctors who work as doctors.

Additionally, some other members of #medtwitter did some investigating and discovered several very friendly messages between Gu and Lau as well as a picture posted by Laury claiming to be herself with Gu. That picture actually turned out to be a picture of Gu with another girl that Gu had posted years before.

But why would Laury post a picture of Gu and another girl and claim it was her? Turns out Laury was also Gu. Finkle is Einhorn, Einhorn is Gu, Gu is Laury and Laury is Finkle.

Is Dr. Gu so lonely that he created a twitter girlfriend for himself in his loneliness following losing his residency position? That would make some sense, if only the real answer was that simple and benign.

In early 2017, Gu started an internet relationship with a then 2nd year medical student (MS2). From the beginning, MS2 noticed red flags that all Gu seemed to care about was twitter followers and getting more and more retweets.

A few months later, MS2 started receiving twitter Direct Messages from a twitter account, @MaryLauryMD that started with mostly small talk about all things #girlmedtwitter. Then Mary Laury proceeded to then start prying into the medical student’s love life asking if MS2 was dating a surgeon followed by more specific questions of if she was dating Gu and Laury expressing her desire to sleep with Gu.

Valentine’s day night, Gu and MS2 went out on a date where he talked about himself, how smart he was and how awful his life was. Following Gu’s diatribe, they returned to his apartment where he potentially sexually assaulted her while telling her that he “wanted to have unprotected sex” to get her pregnant so “she could never leave” him.

Following this, the DM’s from Laury became more intense asking about MS2’s sexual life and extolling how lucky MS2 would be to date Gu. The DM’s continued with Laury detailing “her” sexual exploits in vivid details eventually including Gu and Laury’s sexual encounters together. When MS2 asked Gu about this, he claimed he only had dinner with Laury.

Turns out Laury never existed, she was a burner account of Gu’s that he created then used successfully to manipulate a woman he potentially sexually assaulted in order to keep her around and prevent her from disclosing the assault.

MS2 didn’t find out about all of this until @MaryLauryMD and Gu’s twitter bullying of Dr. G and the subsequent backlash from #medtwitter and she is understandably devastated.

Unfortunately, this isn’t satire. This is the story as it is best understood currently of Dr. Eugene Gu, his termination from residency, his cyber bullying and manipulating of a young medical student whom he potentially sexually assaulted, his fake girlfriend he used to cover it up, and his desire to become famous at any cost.

Please feel more than welcome to donate to Dr. Glaucomflocken’s favorite charity, First Descents and show your support for the funniest Ophthalmologist Twitter has ever known. Welcome back Dr. Glaucomflecken!

Also, Gu has blocked most of the Gomerblog Twitter accounts from following him. Fortunately we also have burner accounts, we just use them to follow assholes, not to be assholes.