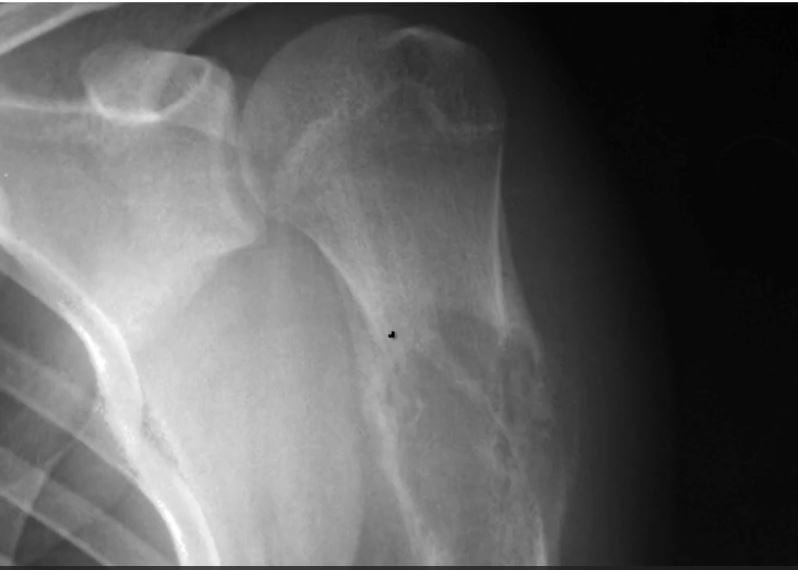 WASHINGTON, D.C. – Arun Matthews, a 3rd year medical student has been reported missing from his third floor library cubicle since the early hours of yesterday. According to his peers, he was last seen in the medical school library computer lab looking at bone radiographs trying to locate the enigmatic Codman Triangle.

The Codman Triangle is a name given by radiologists for the alleged radiographic triangular appearance of the rim of new subperiosteal bone which forms when a lesion lifts the periosteum away from the bone. Many medical students however dispute its existence since most have not been able to correctly identify it on a bone x-ray during a multiple choice NBME exam.

“Last time I spoke to Arun, he told me he had discovered the truth,” said Michael Frock, one of Mr. Matthew’s friends and a fellow medical student. “He told me had unequivocal hard proof that Codman’s Triangle was a hoax and not a real thing, like the Lochness monster or a radiologist that enjoys heartfelt prolonged patient interaction”.

“I think the secret order known as the American College of Radiology got rid of Arun” said Chapman Wayne, another one of Mr. Matthew’s fellow medical students. “It’s because they realized he was getting close to exposing the reality that the Codman Triangle and every other radiograph “sign” never really existed in the first place. Honestly what even is a ‘sunburst appearance’? It sounds like they just read that off a bottle of Garnier Fructis or something.”

When asked about their alleged involvement in Mr. Matthew’s disappearance, the head of the clandestine American College of Radiology, Dr. Rose Slane released the follow radiological report through their public Twitter account:

1) The sad news of Arun Matthew’s disappearance is very sad. I’m sure news like this is never easy for a family to barium swallow.
2) Normal chest radiograph

Recommendation:
1) Pray every day on your Rachitic Rosary towards the Steeple Sign for his safe return. Will continue to follow. Thank you for this interesting consult.
2) Also…we totally aren’t involved in Mr. Matthew’s disappearance, who was last seen not being unconsciously loaded into one of our MRI machines to undergo an experimental memory-wipe procedure.