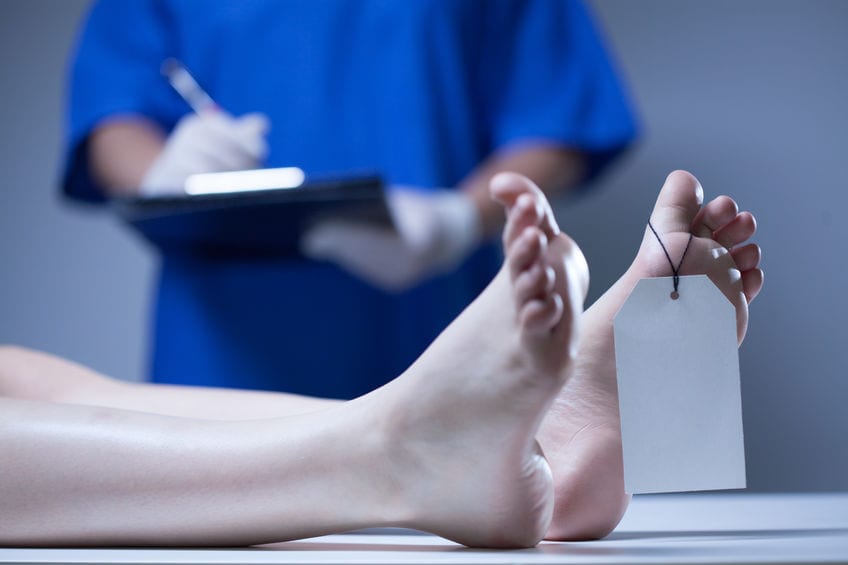 ENCINO, CA—A nationwide recall of human cadavers was issued today after a petrified group of anatomy students at a California medical school discovered a major defect in its cadaver: It was still alive.

Yesterday morning, medical student Edward S Hands says he had just cut into an arm using scissors when the cadaver—affectionately nicknamed “Kenny”—suddenly sat straight up, looked around in a daze, spotted the deep cuts in his arm and body, and calmly said, “Ouch”. Then, hopping off the table, he wrapped a drape around his waist and marched right out of the room.

Body donation organizations are at a loss to explain how a living person could have slipped through the cracks. “We take pride in delivering the highest quality corpses,” said Abby Cadavvy, CEO of Sesame Medical Care, a major cadaver supplier, “ones that will lie perfectly still on the table while students dissect it. We regret that a clearly defective cadaver made its way into an anatomy lab.”

Upon learning of the incident, the U.S. Department of Health & Human Services (HHS) made the unprecedented decision to recall every cadaver. “All cadavers must be sent back to the body donation companies,” said Secretary of HHS Alex Azar, “so they can make sure that the bodies are, in fact, 100% dead.”

Once the bodies are received, they will perform 72-hour cardiac monitoring, 48-hour EEG monitoring, 24 hours of continuous CPR, a Mini-Mental State Exam and a colonoscopy on each body to search for any signs of life.

Wait, a colonoscopy?! “Yes,” said Azar, “because if they are still alive, they’ll make that abundantly clear when you shove a tube up their…well, you get the picture.”

Meanwhile, medical students across the country are reacting to the news of the recall. “Oh my word!” exclaimed Bernardette Lomax, a med student in NY. “We’ve been slicing our cadaver for weeks already. It’d be devastating to learn she’s been alive this whole time!”

As for Kenny, authorities are eager to speak to him and examine him medically, but he hasn’t been seen since his dramatic exit from the anatomy lab. Asking the public for help in locating him, they warn that he may be unarmed and in danger.

Authorities also wish to interview the anatomy professor and the other two-dozen students who witnessed Kenny’s revival (aka #TheyResurrectedKenny), but they too have been unavailable for comment because they all remain in the anatomy lab, frozen in place, eyes wide and mouth agape. In fact, it appears they’ve all been frightened to death…but the good news, at least, is they can now be used as replacement cadavers.