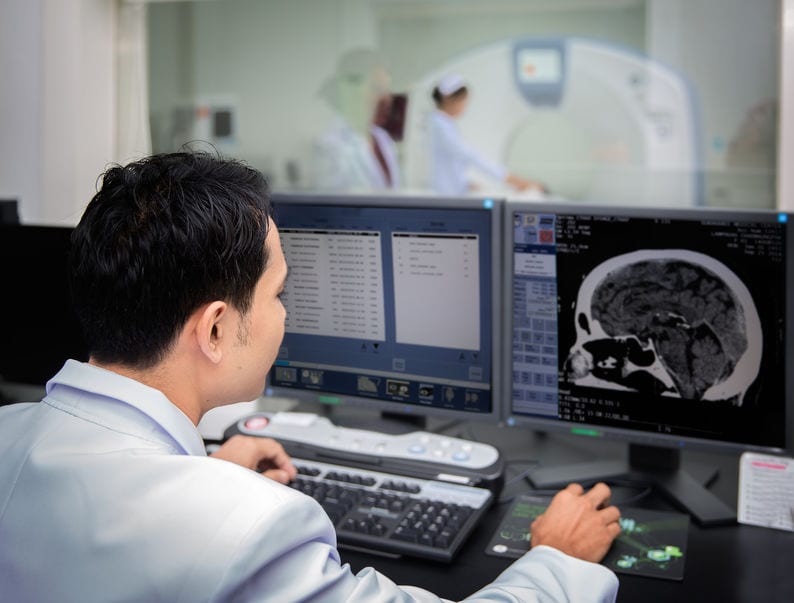 MENLO PARK, NJ—An unusually intense electrical storm this morning produced a prolonged power surge at Menlo Park Memorial Hospital (MPMH), mysteriously causing all electrical power to turn and remain on, incapable of being cut. While this bizarre electrical anomaly went unnoticed in most of the brightly lit medical center, residents in the Radiology reading room collectively groaned when the lights came on.

“Dammit! I hate when this happens!” said visibly frustrated Radiology resident, Mitch Black, as he slid on a pair of extra-dark sunglasses to shield his eyes from the glaring 40-watt incandescent bulbs, lest he go blind, and lathered his body with SPF 100+ sunscreen.

Unable to read any films, the radiologists reluctantly did undesirable things like look at their colleagues in the light for the first time ever. Predictably, that was an utter disaster as these reclusive residents are anything but pleasant to look at. “Uh, yeah, since we’re always in the dark, none of us really spend too much time grooming,” said an unshaven, unkempt Dr. Black, before pointing to a colleague cowering in the corner trying to cover his privates with an X-ray film, “or, in the case of Naked Ray, even dressing ourselves.”

With that activity a failure and imaging studies piling up, desperate residents broke out the Radiology emergency kit, full of devices to block light: bed sheets to make a light-impenetrable fort around a resident and a computer screen, sheets of loose leaf paper to tape over the lights, and the kit even contained a 1st-year medical student, whose limited skill set thankfully included the ability to stand in front of a light source and cast a dark shadow over the resident.

While none of those light-blocking products ultimately proved effective, there was some good that came out of this power “on-age”. Considering that the bulbs in the reading room hadn’t previously been turned on in 100 years, it’s no wonder that residents discovered that the light fixtures still contained original Edison light bulbs. Avid bulb enthusiasts around the country quickly flocked to MPMH to witness a glimpse of history.

But the good news ends there. The electric company indicated it was highly unlikely that power would be back off in the reading room in time for the ER’s evening head CT rush, and it might even take weeks to restore darkness. One could point out, however, that this unfortunate situation could easily be resolved if the residents simply remove the light bulbs, which leaves us to ponder the age-old question: “How many radiologists does it take to unscrew a damn light bulb?!”