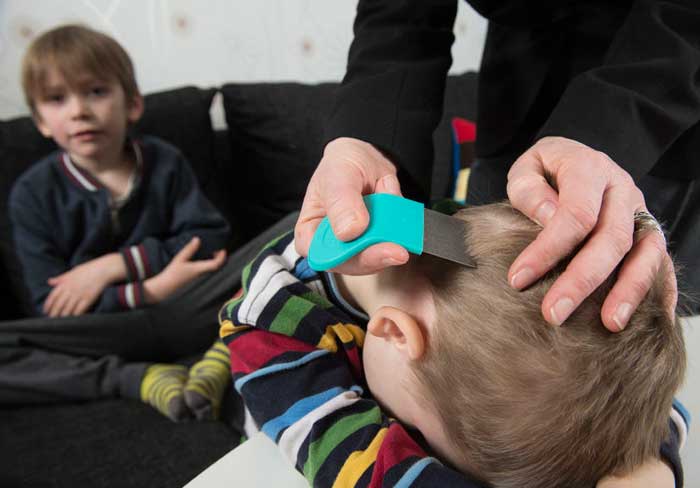 PRINCETON, NJ—A major outbreak of lice has struck a local preschool, leading one frantic mother to hire an exterminator to rid her son’s hair of the icky bugs.

“I do not play around,” said Mrs. Lisa Piditch to What the Bug Pest Control, “not when my little Stewy can’t stop scratching his head because it’s full of tiny, disgusting bugs. Of course, I refuse to pick the bugs and nits out of his hair myself because—eww, gross! So, I need you to come and kill every last one of those blood-sucking bastards…and their little eggs too. Give me the most potent, noxious chemicals you got, and dump them by the gallon right on my son’s head!”

What the Bug Pest Control says it’s never had a request quite like this one before. “This woman is obviously nuts, but she’s 100% right about needing to target the head. So we said, ‘What the bug, we’ll do it!’—which also happens to be our motto. Besides, she threatened to end her contract with us if we said no.”

So earlier this morning, the exterminator sprayed every inch of Stew’s thick, bushy hair and made a stunning observation. In addition to lice, he found a few spider webs, a wasp nest, ticks, centipedes, snakes, and even a squirrel storing acorns in his hair. “It’s pretty clear we’ve been doing this job all wrong all these years,” he said. “Instead of spraying the perimeter of houses, we really should be dousing the children of the house with our chemicals!”

Prior to leaving, the exterminator planted a “Keep Off” sign in Stew’s hair. “Don’t let anyone touch his head or hair for a week, including Stewy himself. That stuff’s really toxic.” Mrs. Piditch thanked him profusely, saying it shouldn’t be a problem to keep her 4-year-old son from touching his hair for a week.

To prevent a recurrence, she has started bathing Stew in a pool of organophosphate pesticide solution and applying a boric acid shampoo to his hair. Overall, she is very pleased with the results and not at all concerned about Stew’s annoying complaints of nausea, paresthesias, weakness, and muscle twitching. She’s also unmoved by the tsunami of drool pouring out of his mouth. “I think he’s just salivating for more lice-killing organophosphate solution,” she said, as she dumped another bucketload of insecticide on him.

Little Stewy apparently also lost all his hair from the exterminator’s chemicals and his new shampoo. “Whatever,” said his mom, “the important thing is we got rid of those stupid itches.”