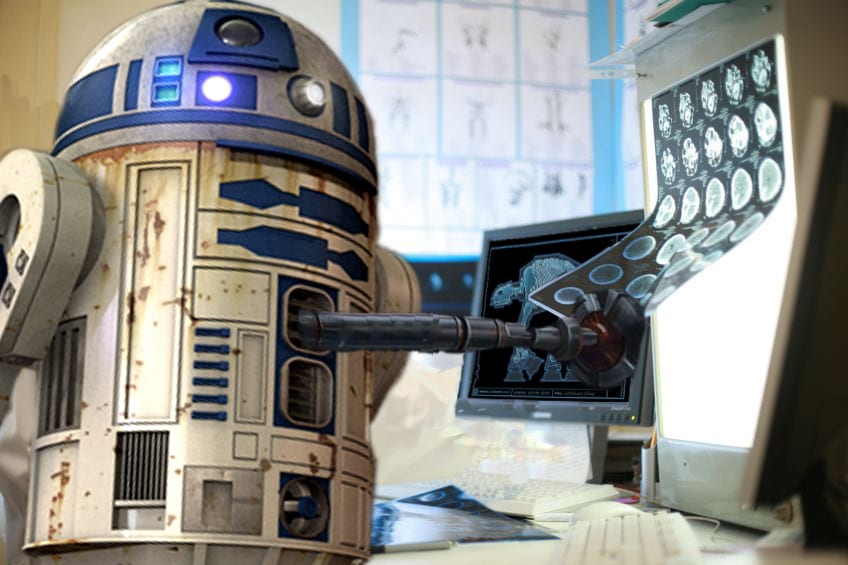 The release of Rogue One: A Star Wars Story is upon us. Before we re-watch Episodes I through VII in our respective break and call rooms, let’s take a look at healthcare’s cast of characters, and even a few personalities, as viewed from the lens of Star Wars.

Don’t let the cinnamon hair buns fool you; nursing is the Rebel Badass of the Hospital Universe. Nursing doesn’t take sh*t from anyone, whether it’s being tortured by Darth Vader, inept interns, or patients similar in disposition to Jabba the Hutt. She knows how to use blasters and stethoscopes as weapons, so don’t mess. Obi-Wan Kenobi is her only hope.

Surgery is the lovable rogue, the one out for personal gain like Han Solo but likable since he’s honestly trying not to kill anyone. There’s a heart buried somewhere under that scruffy exterior and belt full of lasers, bovies, and power tools. Han Solo freezes upon exposure to carbonite or ECGs. Han Solo is always trying to get into the pants of Princess Leia. His “bucket of bolts” Millennium Falcon is the Da Vinci Robot circa 2000. Yeehaw!

This gentle giant standing tall and furry at eight feet is a reliable sidekick granted he doesn’t know a word of English.  Communication is primarily through grunting and banging on things, definitely not notes.  Weapons of choice: Wookiee bowcaster, hammer, Ancef, medicine consult.

R2D2 doesn’t say much; neither do radiologists, particularly if findings are negative.  But when either pipe up, everyone listens.  Neither is perfect though: R2D2 has been undone by enemy fire, while radiology always notes incidental findings.

Clad in white and never ending in number, they are one of Darth Vader’s most annoying instruments to threaten the Rebel Alliance.  The parallels are uncanny.

Pediatrics are the Ewoks

Pediatricians are allies of the Rebel Alliance and natives of the world of Pediatrics, which involves the care of small mammaloid bipeds called “children.”  We like and appreciate the Ewoks, we just don’t want to be an Ewok.

Martin Shkreli is Jabba the Hutt

Gluttony, greed, and deceit in its most wretched form.  If anything, at least he’s slightly likable.  Jabba the Hutt, that is.

Although you try to avoid it at all costs, it always comes back.  Even when you think there is no possible way you would need to do a rectal exam, it shows up. The reanimated version is never as good as the first, and the first just wants to destroy you.

Yoda mentored every Jedi.  Hippocrates mentored every doctor indirectly through his Hippocratic Oath, also known as the Medical Force, until he too died at the ripe old age of 900.  Father of Medicine, is he.  Yesssss.

It’s not enough that this villain breathes so loud and audibly, but Administration has to breathe down the necks of everyone too and suffocate everyone in its path.  Part man and part machine, Administration has lost touch with its human side and turned to the Dark Side.  His red lightsaber is red tape in all its crippling glory.  Administration is as evil as it looks.  Both Vader and Administration dress in black and wish to be addressed as Lord.  Coincidence?

They are the calm sage-like beings within the Hospital Universe who emote love and never give in to hate.  Whereas Obi-Wan is one with The Force, Palliative Care is one with mortality.  Internal Medicine always turns to Palliative Care to answer the toughest question of them all: “Can you make this person a DNR?!” “Luke, use the hospice.” 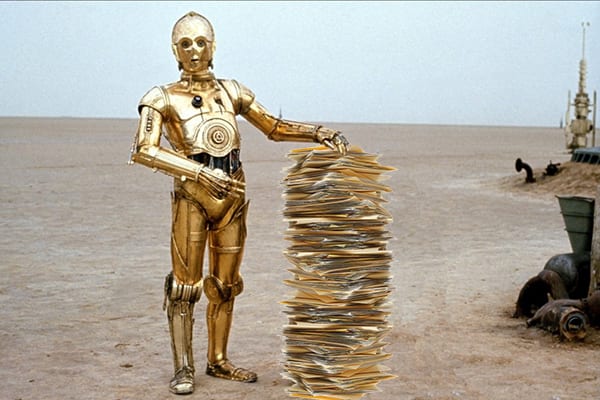 C3PO and EMRs were designed to serve human beings, often doing good but other times acting like hot bumbling, useless messes, particularly after systems upgrades.  C3PO is fluent in over six million forms of communication; EMRs is fluent in over six millions forms of ICD-10 codes. “If I told you half the things I’ve heard about this EMR upgrade, you’ll probably short circuit.”

Like the mysterious bounty hunter, Emergency Medicine holds no allegiances: they will admit to any service at any time and do anything as long as they get paid.  Both say very little.  Boba Fett says to Darth Vader, “He’s no good to me dead.”  Emergency Medicine says to inpatient providers, “I have an admission.”

What’s more adorable than R2-D2?  Medical students and BB-8.  They are cute and bouncy, rolling about their business.  We don’t know a lot about BB-8 yet, but the same’s true for medical students.  When they speak we don’t understand them. Both, however, are full of potential.

Utilization Review as the Sarlacc

This omnivorous creature with frightening mouth tentacles, teeth, and callback numbers prey on innocent healthcare practitioners who incorrectly designate a patient’s inpatient or observation status.  No one has ever seen the full body of a Sarlacc since it buried either underground or in an office somewhere.  Everyone fears the Sarlacc.