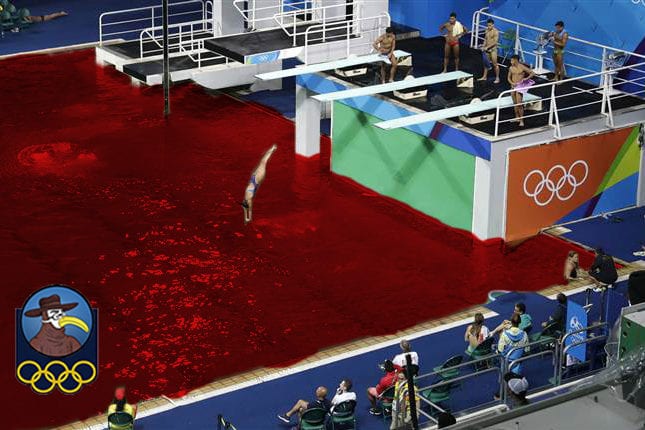 RIO DE JANEIRO, BRAZIL – Rio Olympic officials have once again apologized profusely for all of the Olympic swimming pools being filled with blood this past week.  Officials have concluded that someone mistakenly added 3,000,000 liters of blood products around August 5 and simply no one noticed.

“It was an honest mistake,” said director of venue management Gustavo Nascimento.  “Come on, all you folks at home, you know how simple it can be to accidentally fill your bathtub with blood, right?  Happens all the time.”  Nascimento went on to add that the electronic monitoring system did also detect “quite a bit of FFP and platelets too.”

Synchronized swimming athletes voiced the most concern as they need to see one another under the surface in order to perform.

“I don’t like it when I have coagulated goggles, that’s just gross,” said United States synchronized swimmer Anita Alvarez.  “Not only can I not see [partner Mariya Koroleva], but the blood just freaks me out into thinking she was eaten by a man-eating shark or something.  It’s horrifying.”

Despite these most unusual of occurrences, these athletes have remained professional and persevered.  Just ask Katie Ledecky, who has dominated this year’s Olympics and even beat her own world record in the women’s 800m freestyle despite having to swim through a much more viscous and disturbing liquid.  “Wanting to get out of the blood pool makes you swim awfully fast,” she told GomerBlog reporters earlier today.  “I’m surprised I didn’t shave a minute off my time.”

Though fans will have to wait 4 more years for more Olympic aquatic events, this year’s Olympic athletes have never been so thankful to see the Swimming, Synchronized Swimming, and Diving competitions come to an end.

“Can you blame me for retiring?” said the Olympics’ greatest athlete Michael Phelps soaked in blood.  “I know these Games are about blood, sweat, and tears, but this is way too much blood here guys, let’s get real.”