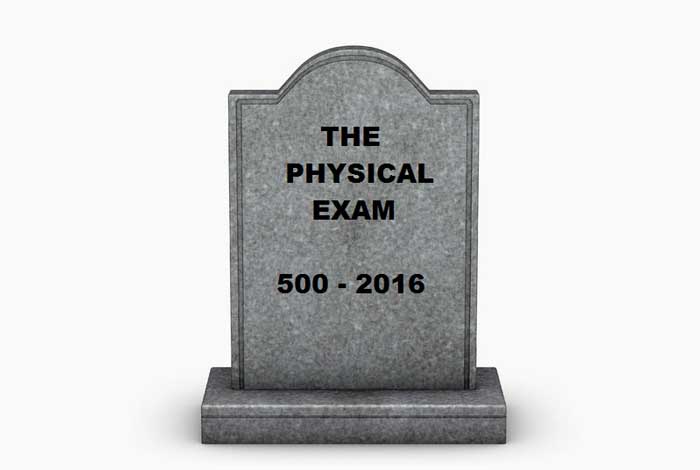 The American Medical Association held a large funeral service today in honor of the Physical Exam, which passed away earlier this month after a decade-long battle with obscurity.  The funeral was well attended by nurses, medical doctors, and trainees from all over the country who wished to pay their respects.  The service began with an hour-long tribute to the highlights of a centuries-old career diagnosing illness, with special recognition given to the following:

S3, S4, and “murmurs,” whatever those are
Palpating the point of maximal impact
Percussing the lungs
Percussing in general
Measuring liver span
Actually putting your own finger into the rectum to examine it
Doing that thing where you have the patient swallow some water then feel their thyroid
Femoral pulses
Reflexes not involving the knee
Cranial nerve I
Pinprick test
Temperature sensation
Any part of the exam where human contact is involved

Following a display of the Physical Exam’s most prized possessions, including a stethoscope, reflex hammer and a little vial filled with coffee beans, several health care providers gave moving eulogies in remembrance of an old friend.

Tim (60-year-old internist): “I’ll miss you dear friend.  My intimate knowledge about you was my only defense against the onslaught of millennial EMRs and imaging studies.  I could always count on you to show me findings that, although might not have any clinical significance whatsoever, could at least be used to humiliate a resident for missing it.”

Lucy (24-year-old resident): “Dear Physical Exam, we never really knew each other.  You were already pretty old and inconsequential by the time I started medical school.  However, I still sometimes put on my stethoscope and listen to the strange thuds, beeps, and boops coming from inside the patient that used to be important.  Hell, I’ll even write about those crazy sounds in my progress notes like I’m a real 1950s primary care doctor.  But then I look at the telemetry and think to myself, technology is pretty awesome.  Lolz!”