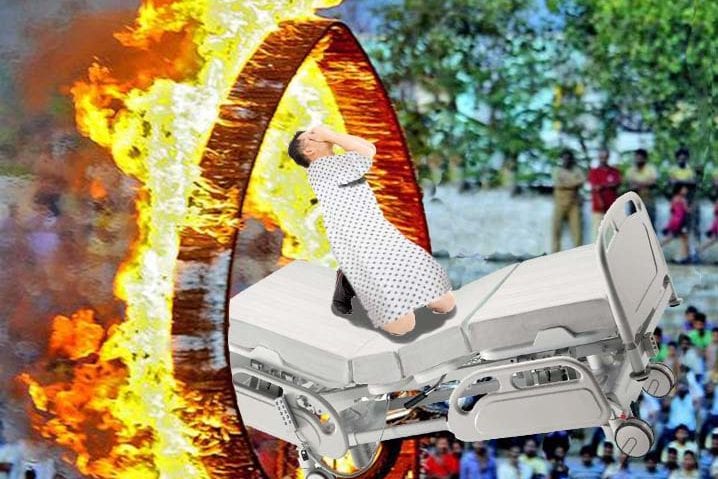 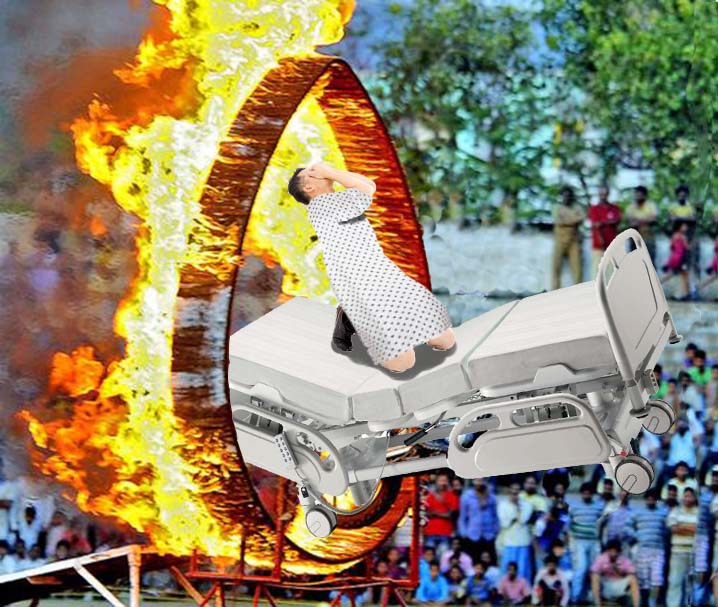 LAS VEGAS, NV – Patient Brian McDowell put on a show for the ages, as he became the first patient on a hospital bed to successfully leap through a ring of fire unscathed.  Performed during a matinee show at the MGM Grand Hospital yesterday, health care personnel applaud the act, calling it the best combination of entertainment and treatment in recent memory.

“There hasn’t been much to write about since Philip Rogers rode in a wheelchair through a halfpipe back in 2001,” wrote local entertainment reporter Eva Roberts.  “All we’ve had is magic mouthwash and pet therapy, but that’s about it.  McDowell’s death-defying leap against patient safety precautions was a much needed breath of fresh air.”  Thankfully, the Joint Commission wasn’t there to witness it.

The 55-year-old McDowell has always been a lifelong adventurer.  His youth saw participation in skateboarding, snowboarding, and motocross biking until “a few too many broken bones” sidelined him for good over two decades ago.  However, it was during this most recent hospitalization that McDowell felt the old itch come back and thought the hospital was just the place to get things started.

“The way I saw it, the worst thing that happens, I get set on fire and there’s a burn unit right here; or if I broke a bone, I knew ortho, PT, and OT would be ready and waiting,” explained McDowell.  “Best case scenario I’ve provided a hospital, a setting not typically known for world-class entertainment, something to talk about for weeks, months, maybe even years to come.”  McDowell idolized Rogers and his wheelchair X Games jumps, and wanted to make a name for himself in a hospital one day.

After convincing his transport tech to arrange the ramps accordingly and give him a good running push, McDowell used his arms and body to steer the hospital bed before he took off “like a Haldol blowdart,” guiding himself through the heart of the ring of fire.  His landing was perfect, no bedsheets were singed, and everyone there to witness the feat got on their feet to give McDowell a rousing standing ovation.

Though McDowell is being treated for asthma exacerbation, he reassures his family, friends, and Gomerblog that the smoke inhalation while passing through the smoky ring of fire was “minimal,” “worth it,” and “better than a ring of my aunt’s perfume.”

McDowell finishes an albuterol nebulizer treatment, takes the mask off, and hacks up some charred mucous.  “If it brought a smile to even one person who looked up from their charting, it was worth it, it was totally worth it.”