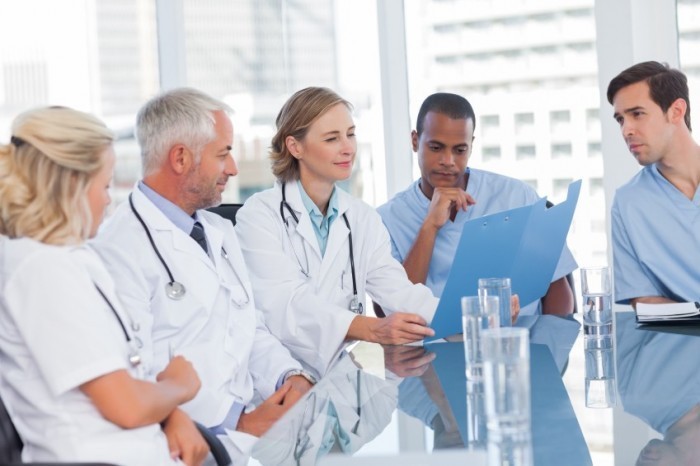 ATLANTA, GA – The tension is mounting on the surgical ward at Emory University Hospital as Dr. Christopher Roberts of Hospital Medicine remains on the fence about restarting a patient’s 12.5 mg dose of hydrochlorothiazide (HCTZ) this morning.

A spokesperson for the hospital stated that at approximately 4:59 PM last night, Dr. Roberts was consulted by Orthopedic Surgery to aid with medical management of a patient with a left femur fracture sustained during a ground-level fall.  They are considering an operative repair later tomorrow as the procedure is non-emergent.

At approximately 5:20 PM last night, Dr. Roberts evaluated the patient and it was during that initial encounter that his fears were confirmed as he learned about the patient’s well-controlled hypertension on a low-dose of HCTZ for the past two years, with which he has been highly compliant.

“His pulse is 80 …” Dr. Roberts muttered, loosening his tie and rolling up his sleeves.

Per nursing staff on the surgical ward, Dr. Roberts has been sitting at a computer across from the patient’s room since 5:45 PM last night, visible perplexed and nervous.  He sent his intern and resident home saying, “Save yourselves.”

“He spent the first hour with his head in his hands,” said nurse Emily Meyers.  “Occasionally, he would massage his temples and say ‘Why me? Why me?’“

At approximately 8:45 PM last night, Dr. Roberts entered a computer order to restart the hydrochlorothiazide.  But as Pharmacy explains: “No more than sixty seconds later, the order was deleted and we were back to square one.”

The crowds on the surgical ward have built steadily since the near-order last night with different supporters becoming more vocal as the night progressed.  Two parties quickly emerged: a liberal pro-HCTZ camp argued the importance of maintaining well-controlled hypertension while a more conservative anti-HCTZ group warned of the potential for hypotension and renal failure post-operatively.  It reached a boiling point at 1 AM when supporters started throwing urinals and blood pressure cuffs at each other.  Barricades were set up by hospital security to curb the violence.  No casualties have been reported.

This morning, some of Dr. Roberts’ own colleagues were present, lending their compadre some emotional support.

“I understand completely,” said Dr. Michael Cole, also of Hospital Medicine.  “Do you resume it, do you hold it?  The ramifications are dire.”

“Sometimes you have to compromise,” said Dr. Sandra Thompson, another colleague of Dr. Roberts.  “I hate to say it, but it might be one of those prn hydralazine times.”

When asked about when a final decision will be made, Dr. Roberts declined to comment.  When asked about how he will later approach the patient’s home metformin for type 2 diabetes, he exasperatedly collapsed forward and started weeping.