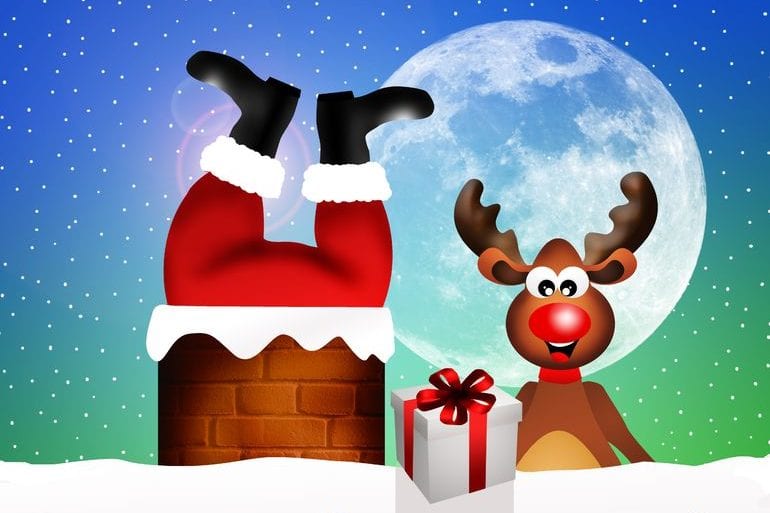 THE NORTH POLE – GomerBlog can confirm that Santa Claus is recovering, but remains in serious condition, at North Pole Community Hospital after an incident when he became wedged in a chimney at his multi-million-dollar practice facility near his residence.  Mrs. Claus has granted GomerBlog access to her husband’s medical files & caregivers.

“Mr. Claus apparently had become wedged in the chimney for an unspecified period of time, as long as 17 hours,” reports Dr. Sri-Sheshadariprativadibayankaram.  “His pear-shaped body habitus and morbid obesity predisposed him to an episode like this after so many close calls in the past.”

Dr. Sri-Sheshadariprativadibayankaram was of course referring to a recent episode in Chicago, Illinois in 2009, when Mr. Claus got stuck near the bottom of a chimney & required coconut oil lubrication to ultimately pry himself free.

“Mr. Claus was finally located by a search team after his wife alerted the local police department about his absence,” Dr. Sri-Sheshadariprativadibayankaram continues.  “The ‘Jaws of Life’ were deployed to extricate Mr. Claus from the chimney.  He was found to be obtunded, likely due to hypoglycemia with no oral food intake with circulating oral hypoglycemic medications used to treat his poorly-controlled diabetes.

Furthermore, he was noted to be in hypercapneic respiratory failure with a pCO2 greater than 90, attributable to his noncompliance with his CPAP machine to treat his underlying obstructive sleep apnea caused by his morbid obesity.  Clearly this patient has a component of obesity-hypoventilation syndrome.  Thankfully, rhabdomyolysis was ruled out.  He was covered in his own feces when he arrived here.  The poor guy was a real mess.”

When contacted by GomerBlog, the North Pole Police Department only indicated that foul play had not been ruled out, and that this was an “open case” and a “police matter.”  There have been rampant suspicions about the motives of many of the reindeer, largely due to their years of indentured servitude & forced manual labor at the hands of Mr. Claus.

Precise details of the incident remain shrouded in mystery, with only one witness willing to publicly speak on record regarding the matter.  Rudolph, a nervous chain-smoking reindeer who works for Santa Claus and who was on the roof at the time of the fall, tells GomerBlog, “Look, man, I didn’t see NOTHING, okay?  As far as I can tell he just slipped.  I’m not gonna say anymore though.  I’ve already said too much.  I’ve been working on my anxiety issues with my therapist as I continue to recover from post-traumatic stress disorder since all the other reindeer used to laugh & call me names.  I was so ostracized, they wouldn’t even let me join in any reindeer games.  I don’t need any more of their bullying in my life & I don’t wanna go down in history as a snitch.  Forget it, this interview is over.  Turn off the microphone.”

GomerBlog can report that Rudolph demonstrated reticence to discuss the event largely due to his fear of retribution by the other reindeers for breaking “The Reindeer Code of Silence” to which he had been sworn.  Furthermore, Rudolph clearly demonstrated significant rhinophyma (a very, very red nose that you would even say it glows), possibly indicative of alcohol abuse, thereby raising questions about the veracity of his account of Santa’s trauma.  Overall, there has been a general reluctance by the weary North Pole community, already torn apart by rampant rival elf gang-related violent crimes, to talk with the media or the police.

This has been a difficult time for the children of the world, particularly after recent news about the hospitalization of Cookie Monster (due to diabetic complications) sent seismic shockwaves through daycare centers and elementary schools.