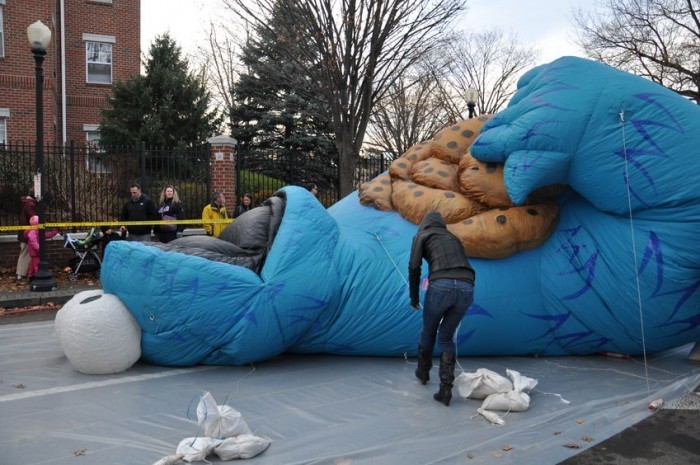 SESAME STREET – Children around the world awoke from sleepy-time to the stunning news that Cookie Monster is battling for his life in the intensive care unit at Sesame Street University Hospital (SSUH) with diabetic complications.  The Children’s Television Workshop, citing HIPAA privacy regulations, has declined to offer any specifics regarding the circumstances that brought him to the hospital, and SSUH would only confirm that a “blue morbidly obese member of the Sesame Street family” had indeed been admitted as an inpatient.  However, GomerBlog has obtained an exclusive copy of Cookie Monster’s admission history & physical document from an anonymous source: 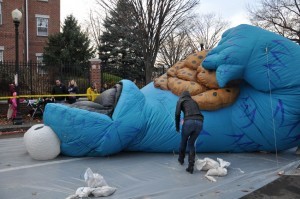 History of Present Illness:
This is a 47-year-old blue muppet who was brought into the hospital after being found unresponsive.  Apparently, Mr. Monster was in his usual state of health when he visited a local restaurant approximately 2 hours prior to presenting.

At least four hundred cookies were rapidly consumed (the estimate is based on the number of empty cookie boxes noted after inventory review by the restaurant manager, taking into account the number of partial cookie fragments accumulated on the floor below the dining table).  When the waitress informed the patient that the cookies were out of stock, the patient began to place orders for large stacks of chocolate chip pancakes.

Per EMS, the accounts by the waitress indicate that Mr. Monster, who is edentulous, barely chewed the pancakes and started to choke.  He had never before reported any episodes of dysphagia or odynophagia.  There were conflicting reports of peripheral cyanosis, although the patient’s blue fur complicated definitive assessment by paramedics.

According to acquaintances, including an uncontrollably laughing hypomanic small red muppet (who is accompanied by a goldfish in a small tank) and a clinically-depressed green frog (who continuously stares at a paparazzi-style photograph of a female pig), the patient had expressed no comments suggestive of intent to harm himself or harm others.

In transit to the hospital, despite clear evidence of delirium, the patient was still stating “Me need more cookies.  Cookies.  Cookieeeeees…”  Initially, upon arriving in trauma bay #2 of the Emergency Department, Mr. Monster was noted to have a GCS score of 11 with an intact gag reflex.  He was given a bolus of 2 liters normal saline, and 2 separate doses of IV Lasix (40 mg each).

At the time of my assessment, the patient was in bilateral soft wrist restraints due to combativeness and agitation.  An Accu-Chek requested at that time revealed a glucose of 658.  Labs were collected and suggestive of diabetic ketoacidosis, and the patient was placed on an insulin drip.

Review of Systems:
The patient does endorse at least a 20 pound (unintentional) weight gain attributed to a recent increase in dietary consumption of cookies.  No chest pain.  He has, however, reported a recent progressive limitation in his exertional capacity over the course of the past month, with reported shortness of breath with ambulation from his front door to his mailbox to check for cookie order deliveries.

Past Medical & Surgical History:
– No history of prior diabetes
– Morbid obesity (BMI > 40) with prior history of unsuccessful gastric bypass surgery
– Reflux esophagitis and gastritis: no recent endoscopy
– Polysubstance abuse (see below)
– Migraine headaches with chronic narcotic use

Social History:
No tobacco, alcohol, or drugs, but the patient has reported multiple stints in rehab due to pastry addictions over the past several years.  No family is available, but per his acquaintances, he has a long-time girlfriend and at least 4 children out of wedlock.  His employment on a children’s television program has recently been less predictable as his role has been reduced due to “that First Lady telling kids to be more healthy” which has caused a great deal of household stressors.

Results:
CT scans and Accu-Chek reviewed above.  Chemistries consistent with an anion gap acidosis and a potassium of 3.4.  EKG showed a low voltage sinus tachycardia tracing with a rate of 127.  Questionable J point elevation.

Impression & Plan:
1) Diabetic ketoacidosis:
– IV insulin drip in intensive care unit
– Will need diabetes education for new onset diabetes
– Check hemoglobin A1c
2) Hypokalemia:
– Replete intravenously since the patient is so combative
3) Possible dysphagia with questionable acute aspiration pneumonia:
– Blind oropharynx pouch and choking raises question of a possible cookie bezoar
– Speech therapy evaluation
– Gastroenterology has been consulted and will plan emergent EGD in the ICU shortly
– Broadly cover with IV antibiotics
4) Questionable anginal equivalent with abnormal EKG:
– The STEMI protocol was activated upon arrival based on the aberrant EKG tracing
– The cardiologist has ordered an echocardiogram
– Results likely equivocal due to body habitus, anticipated technical difficulty of the study
– As a result, the patient has been taken for emergent cardiac catheterization
– Further recommendations per Cardiology
5) Acute on chronic pain:
– Dilaudid PCA pump has been ordered
6) Pastry addiction with high risk of withdrawal:
– Benzodiazepines as needed
– Social work has been notified and rehabilitation referrals will be made based on the patient’s willingness to proceed
7) Morbid obesity with possible occult obstructive sleep apnea physiology:
– Encourage weight loss
– Recommend outpatient sleep study
8) Strabismus & googly eyes:
– Outpatient ophthalmology referral

Please note that this critical care admission required 78 minutes to complete.  Prognosis is guarded.  Condition is critical.  Thank you for allowing me to participate in this muppet’s care.