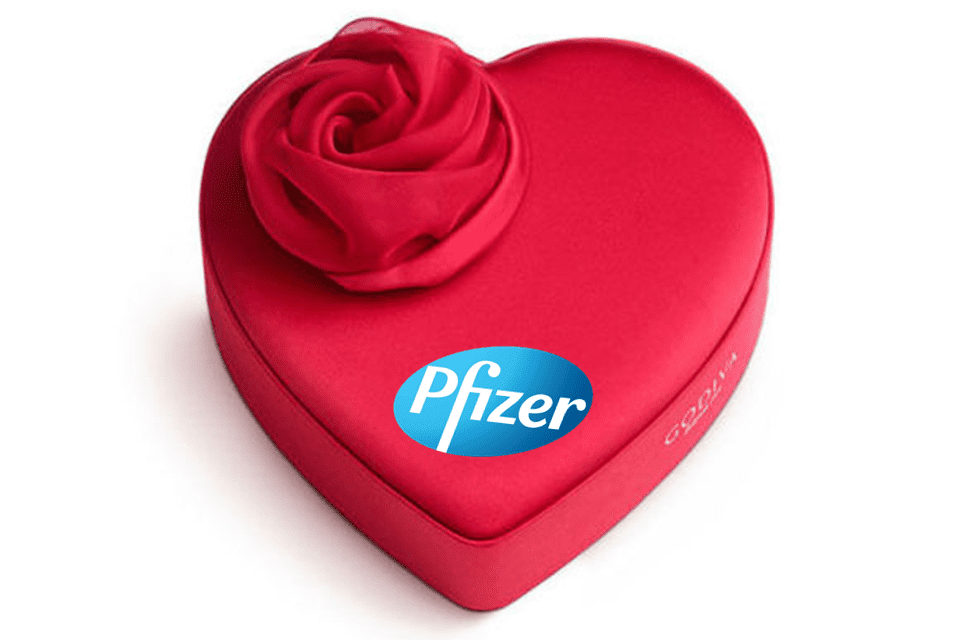 SAN FRANCISCO, CA – Pharmaceutical giant Pfizer has announced plans to release a limited-edition box of assorted medications in time for Valentine’s Day.  The box consists of a wide variety of Pfizer’s most popular medications that are sure to make the sparks fly while simultaneously lowering your cholesterol.

Pfizer CEO Ian Read hopes the heart-shaped boxes of random pills help make Valentine’s Day special for thousands of lovestruck couples.  “What can I say, I’m a romantic,” announced Read, as he untied the red sash on his own box of meds.  “What better way to say I love you than providing your lover with a romantic package containing everything from broad-spectrum antibiotics to the latest antipsychotics.”

Each box contains a unique sampling of brand name medications from Pfizer’s immense pharmaceutical catalogue.  “Our boxes have Lipitor, Effexor, Zithromax, Norvasc, and many more,” stated Pfizer sales representative Donald Lucas.  “Your girlfriend will love taking antifungals one minute and antidepressants the next!  Feel free to open up a nice bottle of wine while the two of you indiscriminately consume a box of prescription medications.  Alcohol doubles the fun while also saturating your cytochrome P450 reserves!”

Pfizer has purposefully made each box without a key.  Early research into the product revealed that the vast majority of consumers would pick out all the oxycodone while leaving the other medications untouched.  “The random nature of the box introduces an element of surprise,” said Read as he picked a rectangular brown pill out of the container. “I think this one is Ativan,” he stated gleefully, quickly swallowing the pill.  “Nope, that was Flagyl.  You win some, you lose some.”