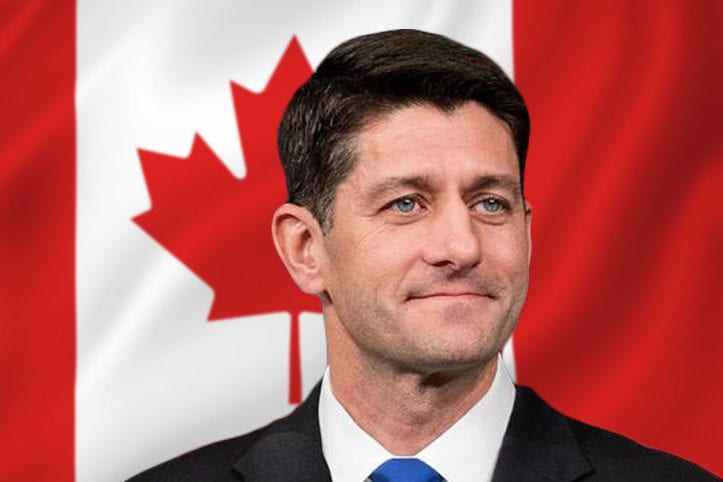 WASHINGTON, D.C. – After the House of Representatives postponed the vote on the American Health Care Act (H.R. 1628) yesterday afternoon, a bipartisan group of congressmen have drafted a brand new health care bill that hopes to achieve 100% coverage by moving Americans to Canada.  It is called the Canadian Health Care Act and is being promoted through the hashtag #RepealAndRelocate.

“Look, Republicans don’t love the Affordable Care Act and Democrats don’t love the American Health Care Act, it’s quite the pickle,” explained House Speaker Paul Ryan.  “But the one thing we all love?  Canada.  Canadians are the best.  After we realized that, the new health care bill practically wrote itself.”  Ryan pointed out that his home state of Wisconsin borders with Canada.  He then excused himself as he was having an intense craving for poutine.

The Canadian Health Care Act of 2017 (H.R. 996687) – also known as Gretzkycare, Lemieuxcare, Crosbycare, or Biebercare – would mandate that all Americans become Canadians.  Because Canada’s health care system is a socialized one that provides coverage to all Canadians through public funding, this ensures that all 320 million Americans are covered because they will be Canadians now, not Americans.

The Congressional Budget Office granted a request for an expedited review and calls the Canadian Health Care Act nothing short of brilliant.  “The beauty of this bill is that it shifts the entire burden onto a whole other country, in this case, our friends up north,” they wrote in a released statement on its web page.  “We essentially will mooch off of them like any good friend would.”  In fact, the only concern noted by the Congressional Budget Office is that “Canada can be awfully cold in the winter.”  Their statement ended with the lyrics to “O Canada.”

Gomerblog has been told that President Donald Trump approves of the new health care bill, telling his advisors that he immediately wanted one of those furry Canadian Mountie hats.